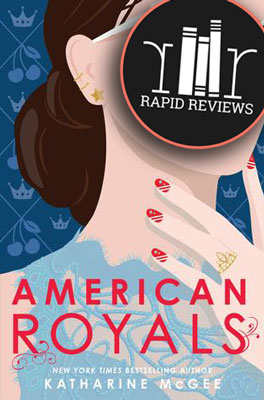 No spoilers in this rapid review of American Royals by Katharine McGee. I liked fairly well it and give it 3 stars. The concept is original, and I enjoy McGee’s writing style. While the storyline is fun, McGee doesn’t capitalize on the facets of this alternate America like she could have. Instead, her main focus is the love lives of the three children of the current American monarch.

Yes, you read that right: I said American monarch. Royals tells an alternate history, one in which the constitution established a monarchy through the line of George Washington. The story is set in present-day America, and much of the government and the evolution of American society to its modern state remains the same. The difference is the head of the government is a king instead of a president.

Two generations ago, King Edward III decided to change royal precedent. Instead of the oldest male becoming the monarch, he wanted the oldest child—whether male or female—to rule. King Edward III’s oldest child was a son, King George IV, the current reigning king. But King George IV’s first child is a daughter, Beatrice, and she will become the first female monarch someday when her father passes away.

STACY’S BOOK RATING
I give it 3 stars overall.
Let’s be friends on Goodreads:

Beatrice and her younger siblings, twins Samantha (Sam) and Jefferson (Jeff), have grown up in the spotlight. I noticed many similarities to past British royalty (think the TV series The Crown) and current British royalty (think Prince William and Prince Harry). Beatrice is a dutiful, seemingly perfect child, while Sam and Jeff’s antics regularly hit the tabloids.

Because of her future role as monarch, Beatrice’s decisions carry more weight than those of her siblings, and decisions regarding her love life are no exception. While Sam and Jeff are free to date and marry whomever they choose, including commoners, Beatrice isn’t allowed to do so.

Early on in Royals, Beatrice’s father shares a secret with her followed by a request for her to find a husband soon. He and her mother have put together a short list of worthy candidates, some of foreign royalty and some of American nobility. And so her search for a husband begins, starting with—what else?—a royal ball to meet the contenders.

I really wish McGee had further explored the political ramifications of having a monarchy versus a presidential democracy. Instead, she wrote a fairly typical YA novel littered with teen antics and young love stories. The plot was fun and well told, but against this interesting backdrop, she could’ve delved into more meaningful, thought-provoking speculation.

How different would America be if the Founding Fathers had modeled the government more closely after the ones they left behind in Europe? I want to know about the siblings’ love lives, but I want to learn about this, too! Maybe the next book in the series will explore heavier topics. Will I read book 2? Absolutely! I’m excited to see where the Beatrice, Sam, and Jeff’s stories go from here.

I recommend this book to anyone interested in a lighthearted YA novel focusing predominantly on the love lives of the main characters, especially those who enjoy following British royalty and Hollywood-like antics.

Let us know what you think about American Royals in the comments! No spoilers on this page, please!

Ready to read American Royals? Click to buy and help us pay for hosting.