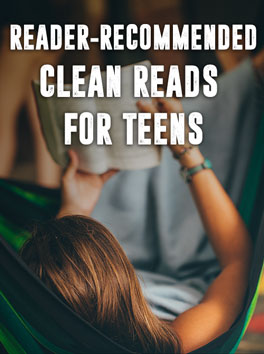 We’re thrilled about the buzz generated by our clean teen books post! Thank you for finding us and for sharing our passion for identifying clean YA books—those without sexual content and without excessive language—for readers of all ages. And YOU, our faithful readers, haven’t stopped at just sharing our passion; you’ve also shared your recommendations! The comment section on our original post (Clean YA Books for teens, tweens, or anyone) has been flooded with reader-recommended books, but we’re excited to share them in this post, alphabetized by author last name.

Also see our editor-recommended Clean YA books for teens, tweens, or anyone.

Our User-Recommended Clean Books for Teens:

The Legends of the First Empire series by Michael J. Sullivan

The Kingfountain series by Jeff Wheeler

The Crescent Stone by Matt Mikalatos

Only in Gooding series by Cathy Marie Hake

The Prophet’s Apprentice by Cassandra Boyson

A Class of their Own series by Jen Turano

The Feud series by Tamara Leigh

The Lady and the Lionheart by Joanne Bischof

Trouble in Store by Carol Cox

Chances Are by Traci Hunter Abramson

Kiss of the Spindle by Nancy Campbell Allen

Thief of Always by Clive Barker

The Girl Who Drank the Moon by Kelly Barnhill

The Door Within trilogy by Wayne Thomas Batson

The River of Time series by Lisa Tawn Bergren

The War that Saved My Life by Kimberly Brubraker Bradley

The Heritage of Shannara by Terry Brooks

Not if I Save You First by Ally Carter

The School for Good and Evil series by Soman Chainani

Dragons in Our Midst series by Bryan Davis

Echoes from the Edge trilogy by Bryan Davis

The Beautiful Pretender by Melanie Dickerson

Out of My Mind by Sharon M. Draper

100 Days of Sunlight by Abbie Emmons (*language warning, according to another reader*)

Even the Darkest Stars by Heather Fawcett

The Brotherband Chronicles by John Flanagan

City of a Thousand Dolls by Miriam Forster

The Half Bad trilogy by Sally Green

The Mapmakers trilogy by S.E. Grove

The Lie Tree by Francis Hardinge

The Lost Conspiracy by Frances Hardinge

The Hero’s Guide to Saving Your Kingdom by Christopher Healy

She Loves You (Yeah, Yeah, Yeah) by Ann Hood

The Librarian of Auschwitz by Antonio Iturbe

The Redwall series by Brian Jacques

Red Rock Mysteries by Jerry B. Jenkins (probably not for older teens)

A Thousand Nights by E.K. Johnston

Shadow of the Fox by Julie Kagawa

Children of the Lamp series by P. B. Kerr

The Order of the Rose by Alysha King

The Giver series by Lois Lowry

The Princess in the Opal Mask by Jenny Lundquist

Since You’ve been Gone by Morgan Matson

The Unwanteds series by Lisa McMann

Keeper of the Lost Cities series by Shannon Messenger

The Colors of Madeleine series by Jaclyn Moriarty

The God Hater by Bill Myers

Children of the Red King series by Jenny Nimmo

Island of the Blue Dolphins by Scott O’Dell

The Configured trilogy by Jenetta Penner

The Wingfeather Saga by Andrew Peterson

The Immortals series by Tamora Pierce

Once Upon a Con series by Ashley Poston

Between Shades of Gray by Ruta Sepetys

Salt to the Sea by Ruta Sepetys

Arc of a Scythe series by Neal Shusterman (*violence warning*)

The Dark Side of Nowhere by Neal Shusterman

This Is What Happy Looks Like by Jennifer E. Smith

Geography of You and Me by Jennifer E. Smith

The Scorpio Races by Maggie Stiefvater

A Semi-Definitive List of Worst Nightmares by Krystal Sutherland

The Last Boy and Girl in the World by Siobhan Vivian

The Keeper’s Chronicles by Becky Wallace

To Best the Boys by Mary Weber

The Leviathan trilogy by Scott Westerfeld

The Man Who Loved Clowns by June Rae Wood

Children of the Stars by Freddie Perez

Rangers of Prydous by Freddie Perez

City of Ember by Jeanne DuPrau

The Seer: The Kalila Chronicles by Erin R. Howard

The Heir of Ariad by Niki Florica

The Six: The Gateway Chronicles by K.B. Hoyle

Alcatraz Versus the Evil Librarians series by Brandon Sanderson

The Witch’s Boy by Kelly Barnhill

Peter and the Starcatchers series by Dave Berry

Little Women by Louisa May Alcott

The Wonderful Wizard of Oz by L. Frank Baum

The Man in the Iron Mask by Alexandre Dumas

The Three Musketeers by Alexndre Dumas

The Strange Case of Dr. Jekyll and Mr. Hyde by Robert Louis Stevenson

Raise your hand if you would love to have this hom