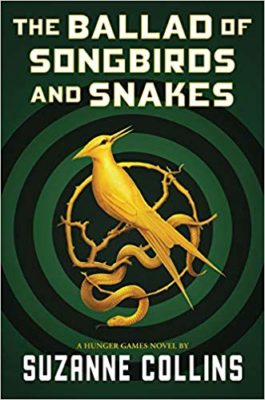 Suzanne Collins is releasing a new book set in the Hunger Games world! According to an article in Time, it will take place in “…the reconstruction period known as the Dark Days that took place following the First Rebellion, the civil war that was fought between the districts and the Capitol 75 years prior to the start of The Hunger Games trilogy. After District 13 abandoned the rest of the districts to secure their own freedom and the forces of the Capitol crushed the rebellion, the Treaty of Treason — which instituted the Hunger Games — was put into effect.”

Collins said the following in a statement released on June 17, 2019: “With this book, I wanted to explore the state of nature, who we are, and what we perceive is required for our survival. The reconstruction period 10 years after the war, commonly referred to as the Dark Days — as the country of Panem struggles back to its feet — provides fertile ground for characters to grapple with these questions and thereby define their views of humanity.”

A Ballad of Songbirds and Snakes will take place 64 years before the first book in the Hunger Games trilogy. It’s rumored to begin on the morning of the reaping of the 10th Hunger Games. Will there be any familiar faces in this prequel series? President Snow and Mags would have been alive during this period. We have a feeling both characters will make an appearance to tie this new series to the old one. Are you excited about this news? Do we even need to ask? We’re sure YA readers everywhere are ecstatic to hear this news!

A Ballad of Songbirds and Snakes is slated to be released on May 19, 2020.

Want to pre-order this Hunger Games Prequel? Click to buy and help us pay for hosting!