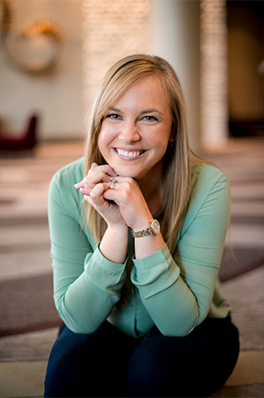 I recently had the privilege of interviewing Nadine Brandes, author of Romanov, Fawkes, and the Out of Time trilogy. I love what she had to say about her latest fantasy retelling, as well as her writing process. She also shares how she connects with her readers via social media. Read on for more!

Sara (Book Series Recaps – BSR): I LOVE the cover of Romanov. Can you tell me the process of deciding on cover art? Who ultimately decides? Were there many revisions?

Nadine Brandes: The first step is that I fill out a long multi-page form on what I envision for a cover—whether that’s color scheme, style, etc. I also include important elements and the mood of the story. Things like that. Then my publisher hires the cover designer and presents me with (usually) two options. After a couple back-and-forth we have a final! ROMANOV’s cover had my heart from the very start. It was originally a different color scheme (red with yellow swirls.) The two options I was presented with were both stunning, and we had to take them to a small group of readers for an opinion on which one they loved best. Ultimately, my editor and I agreed on which one to go with. In the end, my publisher will always have the final say. I’m thankful that my publisher involves me as much as they do.

I actually show the different covers we went through on my Instagram: https://www.instagram.com/p/Bw-hmyyHpxu/

Sara (BSR): What drew you to Anastasia and the Romanov family, and what was your inspiration for your spin on their story?

Nadine: A part of my heart has always belonged to the Russian people. It was the first country I ever traveled to. I spent part of my childhood growing up in Alaska, where we studied Russian in school, and—on a more shallow note—I always loved the animated film. So when I was thinking of historical fantasy retellings, it was a no-brainer! Not only did I want to give my own take on Nastya and her spunky personality in a dire situation, but I wanted to learn more about the Romanov story as well.

Sara (BSR): How would you describe your research process for Romanov?

Nadine: Extensive! I read endless biographies, history books, and searched deep into archives. I traveled to Russia and visited one of their many homes and interviewed Russian historians. It was difficult to find all the information I hoped to because a lot of the history was destroyed (which is one reason I start the story with Nastya burning her diaries…that really happened, and so much of their story was lost.) But that made it feel more and more like a treasure hunt, especially when I did end up unearthing information I spent days and weeks looking for!

Sara (BSR): One of my favorite things about your books is how you creatively weave fantasy and reality. Where did you get your ideas for the fantasy aspects of your plot?

Nadine: I believe words have power—a lot of people believe that. And so I wanted to deliver that concept as a magical element mixed with Russian culture. Thus I came up with spell ink—ink that, when used to write magical words, enacted a power that could heal, rescue, and even mess with time. [wink]

Sara (BSR): Where did you get the idea to write a retelling of the historical story of Guy Fawkes and his gunpowder plot?

Nadine: I lived in York, England for a time which, coincidentally, is where Guy Fawkes was born. While there, I learned a little about his story, and I found it fascinating how people either saw him as a hero or a terrorist. I wanted to dive into the story and see why such different perspectives exist. When I learned that Guy Fawkes may or may not have had a son, I knew I had to tell Thomas’s story.

Sara (BSR): I see you’ve written a few standalone novels and a trilogy. How was your writing process different between a single book and a trilogy?

Nadine: Oh goodness. Writing a trilogy allowed me more time to think about how I would wrap things up. I could leave things open-ended in books one and two knowing that someday, after a lot of thought, I’d wrap it up in book three. So I did far less plotting.

But writing a standalone was much harder because everything had to make sense and have closure by the end of the book. There was much less available brainstorm time while on deadline. I had to have some sort of plot or idea before going into the drafting process otherwise it would just end up a mess.

Writing standalones have been exhilarating—like a sprint—whereas writing a trilogy felt more like taking a long multi-day hike through magic and wonder.

Nadine: I don’t really have one! I know that, by this point (having five books published), it’s probably expected of me, or people think all professional authors have a routine, but I don’t. I have two babies, and I’m a stay-at-home mom. The way I fit in the writing is I choose a few days a week, and I tell myself, “Writing is the priority today.” (Aside from keeping the offspring alive, of course.) So on those days, I abandon all other responsibilities (cleaning, cooking, marketing, etc.), and whenever I have a free minute, I spend it writing. It’s worked for me so far!

Sara (BSR): Where is your favorite place to write?

Nadine: Outside or near a window. I draw endless inspiration from nature.

Sara (BSR): We’d love to know the story of how you became a full-time author. Was it a quick process or a long time coming?

Nadine: I did a lot of waiting on the front end. I had been writing for 7+ years, honing my craft, before I ever pitched anything, and once I entered the pitching game, it took off from there. This happened through attending countless writing conferences and events. But my first contract didn’t automatically turn me into a full-time author. I was also a freelance editor full time to bring in income. Then, around the time I was origin my fourth book (FAWKES), I was established enough as an author to step back from editing and focus on writing full time. I am blessed that I don’t have to be the sole breadwinner for our family (my husband does that), so this allows me to write full-time without the pressure of always having to get contract after contract to make sure we can eat all the shortbread I so deeply crave.

Sara (BSR): Tell us about the importance of an author’s online presence. How has social media and your website helped you connect with and market to your target audience?

Nadine: Connecting with your readers is the new marketing—at least for authors of YA fiction. That sounds like a very cold way to put it, but it’s true, and it’s important. Personally, my constant desire as an author has always been to connect with readers. I joined social media for that purpose alone, and—as a bonus—it ended up helping me sell more books. Not only has it helped me reach my target audience, but it has helped me understand them more, too. We’re buds now. 😉

Sara (BSR): What advice would you give to aspiring historical fantasy authors?

Nadine: Research all the big stuff before you start writing (timeline, huge historical events, important characters, and their backgrounds) and save the small stuff for later (clothing material, miscellaneous terms, descriptions, etc.) Because—as I experienced with FAWKES and ROMANOV—I didn’t know what I needed to research until after I’d written the bones of the story. When I tried to do all the research on the front end, I ended up researching tons of things I never even needed and wasted a lot of my time.

Also, make sure your fantasy element fits the world. With FAWKES, I replaced the religious turmoil happening at the time with magic. With ROMANOV, I put the magic in a Matryoshka doll and tied it to the revolution and rising of communism. Make sure that it fits your historical time period, otherwise, it can easily feel out of place.

Sara (BSR): What books are on your bedside table right now?

Nadine: A DRESS FOR THE WICKED, A TIME TO DIE (I’m doing a reread!), and several nonfictions.

Nadine: Paper books! I prefer hardcover for most YA though I like paperbacks for contemporaries and paperback or ebook for nonfiction.

Thanks so much to Nadine for taking the time to answer our questions! Check out Romanov below.

The history books say I died.

They don’t know the half of it.

Anastasia “Nastya” Romanov was given a single mission: to smuggle an ancient spell into her suitcase on her way to exile in Siberia. It might be her family’s only salvation. But the leader of the Bolshevik army is after them, and he’s hunted Romanov before.

Nastya’s only chances of saving herself and her family are to either release the spell and deal with the consequences, or enlist help from Zash, the handsome soldier who doesn’t act like the average Bolshevik. Nastya has only dabbled in magic, but it doesn’t frighten her half as much as her growing attraction to Zash. She likes him. She thinks he might even like her.

Check out these novels by Nadine Brandes (affiliate links):