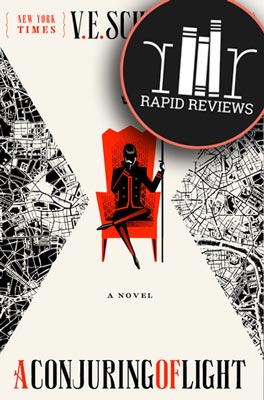 Excuse me while I gush for a few minutes. I loved this series and this book and give it 4.5 stars! There will be spoilers at the end of this review of A Conjuring of Light by V.E. Schwab. I just couldn’t seem to write a spoiler-free review of this book, but I’ll warn you before I dive into the “spoilery” stuff below.

This is the first Schwab-penned series I’ve read, and I can’t believe I didn’t pick it up sooner. I knew it was out there and always had a feeling it was something I would enjoy. When I saw everyone raving about the finale, I knew it was time to pick up book 1. And it did not disappoint! I loved the entire series from start to finish.

Schwab is SUCH a gifted writer! Again and again I wanted to just sit back and sigh as certain passages resonated in my mind. She used beautiful turns of phrase with perfect descriptions and tone to build this amazing world and these beloved characters.

All in all, this was a fitting end to a spectacular series. I recommend it to anyone interested in reading a book on the more mature side of YA! (It might actually be categorized as an adult book, but the characters are YA-age.)

****EVERYTHING BELOW THIS POINT IS A SPOILER****

This magical world was unlike any I have read about before. I enjoyed Schwab’s unique take on magic, magicians, and (of course) Antari. The parallel Londons, each with their own set of issues, and the travel between them were particularly interesting aspects. I also enjoyed what Kell did to save Rhy and the connection they shared once the spell was cast. I also thought the spell Tieren used to put the citizens to sleep was brilliant. It was a peculiar yet logical solution to the problem of so many people being polluted/invaded by Osaron. The culmination of the spell, with Tieren falling asleep as well, was really cool.

But for me, the single best part of the story was Schwab’s genuine characters. The four mains were very well-developed. The best authors create characters who seem to truly exist; they literally leap off the page. Two of my favorites are Kaz Brekker and Will Herondale. I feel life in a few of Schwab’s characters, too.

Some of my favorite things about this book/series:

1) EVERY SCENE with Alucard and Lila – This was my very favorite thing about the series! I especially loved all their scenes on the ship in book 2 as well as all the times in book 3 when she flashed back to Alucard teaching her a certain aspect of magic.

2) Kell and Alucard’s bickering/disdain/mock disdain for each other – This was a close second for my very favorite thing! I think I laughed aloud during each interaction.

3) Holland’s story – I did not expect his backstory would be one that would win my sympathy, but it did 1000%. He seemed so awful, but then we learned how much he silently suffered and what he sacrificed. I am so, so happy he ultimately had a peaceful end.

4) The fact that Ned now has the inheriter – Okay, so this one’s a little random. But I think it’s splendid! Ned has been intrigued by and yearning for magic basically his whole life. And he now has the most dangerous piece of magic in any of the worlds buried under his tavern!!! Since Osaron and/or the black magic was not completely destroyed, could he/it resurface at some point? I love this dangling question to tickle the back of our minds!

1) The most glaring ones = Kell’s and Lila’s backgrounds:

a) Kell knowingly rejected the chance to learn about his parents and (possibly) the first five years of his life. I respect that decision, yet I still wonder what that paper said and what the full story is! (I initially wondered if Tieren was his father. Did anyone else feel like he might be at some point in the series?)

b) I thought Lila’s family, why her eye was plucked from her, why she didn’t remember any of it, and why she was drawn to the Five Stars, seemingly the center of the London connection, would be explained in detail. But we got nothing! Remember when someone (maybe Maris?) mentioned how most memory spells eventually wear off unless the recipient doesn’t want to remember? What do Lila and Kell both apparently want to keep blocked from memory?! This really intrigues me!!!

2) How are the various Londons connected? Furthermore, why were the taverns in each connected and seemingly important?

3) What did Maxim’s spell do? Did it accomplish what he wanted it to? What were his secrets?

5) Why did Rhy suspect the Veskan princess was dangerous? (Remember when he told Kell as much in book 2?) It was foreshadowing, for sure. Did Rhy have a reason to suspect her, or was it just a hunch?

6) How/when did Kell and Holland get their black eyes? Were they born with them?

I like a series that keeps me thinking/talking long after I finish it, so I am okay with having several unanswered questions. This book will certainly merit continued thoughts and conversations!

Award for most growth of the course of the series – Rhy

1) I find it a little convenient that Alucard happened upon that ring on Maris’ ship. The ring ended up being vital to defeating Osaron, yet it was something the gang just stumbled upon.

2) I saw so many people dub the ending as bittersweet, which is easily my favorite kind. For me, it was sweeter than I imagined; I was expecting a little more bitter. I can’t articulate what I was hoping for exactly, and there were obviously many tough/sad things that occurred. And I really liked how the series wrapped up; I just didn’t hurt quite as much as I thought I would.

Let us know what you think about A Conjuring of Light in the comments!

Ready to read A Conjuring of Light? Click to buy and help us pay for hosting.