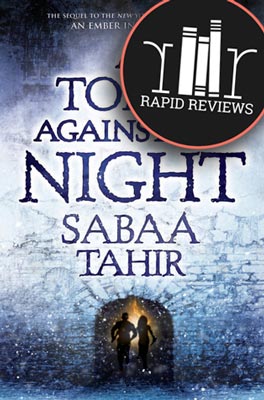 No spoilers in this review of A Torch Against the Night by Sabaa Tahir. I give it 4.25 stars!

Oh, Sabaa…You shocked me several times! I even gasped aloud once. The surprises weren’t foreshadowed very heavily until right before the reveals, but they still felt fairly well-earned and rewarding. These shocks alone raised my rating from 4.0 to 4.25 stars.

I often find that initial books in a four-book series are a little slow. And I felt An Ember in the Ashes was no exception. Maybe part of the problem was also that I had very high expectations when I picked it up a few months ago. It was almost universally loved and highly rated, so I expected to love it. Instead, I just liked it. It was a bit of a slow start for me.

Torch achieves much more in the way of character development, mythology revelation, and political intrigue. There are so many characters and so much going on that maybe it takes two books to move past introductions and start digging deeper. Tahir showed us exactly where we were headed at the end of Ember, with Elias and Laia embarking on a journey to rescue her brother from Kauf Prison.

Tahir’s heavy leaning on the supernatural and mythological elements as well as the political intrigue first introduced in Ember surprised me. I assumed these elements would be accomplished in the latter books in the series, but so much develops in Torch against the backdrop of the main characters’ journey to Kauf.

I was surprised by the brutality in parts of the book. It was hard to read at times. Yet it’s an accurate portrayal of what happens in certain parts of the world and what has happened during certain times in history. Plus, Torch drives home the point we all know well: people can bear more than they ever thought possible and are often remarkably resilient.

Tahir provides an added perspective in this book: Helene’s. I really enjoyed being inside her head. At first, I was disappointed because she seemed to have lost a little of her edge from book one. But overall, I was glad to learn more about this character.

I enjoyed this book and definitely recommend it! I’m excited to see what’s next for Laia, Elias, and Helene! I also recommend the audio version of the book. Each of the three parts is read quite well.

Let us know what you think about A Torch Against the Night in the comments! No spoilers on this page please.

Ready to read A Torch Against the Night? Click to buy and help us pay for hosting.