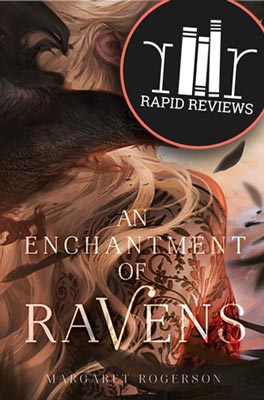 No spoilers in this review of An Enchantment of Ravens. I give it 4 stars. It’s always fun to read about the fae, and I found debut author Margaret Rogerson’s take on them and their interaction with humans entertaining. Plus, her writing style was quite beautiful.

Enchantment is about Isobel, a young woman who makes a living painting pictures of the fair folk. Her talent delights her customers, who are obsessed with human craft, and soon she is commissioned to paint Rook, the long-absent autumn prince. Sparks fly when the two are together, but Rook is angry when he sees the finished product. Isobel painted him with human emotion on his face, so he calls her to the fairy lands to answer for her indiscretion. Isobel is nervous about the charge against her but is excited to leave Whimsy, her homeland stuck in perpetual summer, for a new adventure. As is to be expected when dealing with fair folk, things don’t go smoothly as Isobel journeys in their lands.

STACY’S BOOK RATING
I give it 4.0 stars overall.
Lets be friends on Goodreads:

This book captured my attention and piqued my interest from the first page. There were a few slow parts, but overall the pacing was acceptable. Even in the slow parts—or during a great action sequence or a fun conversation or really any and every scene—the prose was loaded with figurative language. There were so many similes and metaphors! While I normally would find this overbearing, it was fitting for this particular book.

There was a touch of instalove in Enchantment. At times, Isobel would take a step back from the narrative to talk directly to the reader, and one of the times she did so was in attempt to address the instalove. So the author acknowledged it in a tongue-in-cheek way, which made it a little better somehow. While the emotion seemed a little unlikely at first, I appreciated the independence and strength Isobel maintained despite her romantic feelings toward Rook, even when it put her in tough situations.

As I’ve read more and more books about fair folk, I’ve discovered many similarities among the tales, including the inability lie, the power of a true name, and the courts based on seasons, to name a few. Much of the background must be legend instead of the creation of an individual author’s mind. Writers seem to build on the legends and make them their own, but I’m often left wondering how and when these legends began to take shape. Does anyone else do the same?

I recommend this book if you’re in the mood for a fairy tale. And it’s a standalone! I LOVE a good series, but every once in a while it’s nice to get the whole story in one cover-to-cover session. So this added to my enjoyment of Enchantment. Since it’s a standalone, I can’t help but wonder what’s next for the talented Rogerson. Will it be another fairy tale, or will it be something completely different? Whatever it is, I will give it a try!

Let us know what you think about An Enchantment of Ravens in the comments! No spoilers on this page, please!

Ready to read An Enchantment of Ravens? Click to buy and help us pay for hosting.