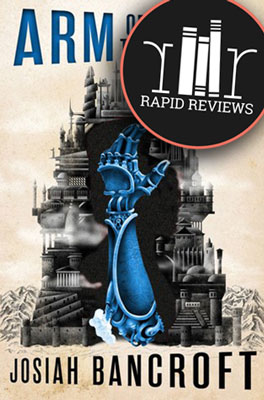 No spoilers in this review of Arm of the Sphinx by Josiah Bancroft. I really liked it and give it 4.5 stars. If you’re looking for a unique fantasy world and great writing, look no further. This series definitely stands out among the competition in the current high fantasy market.

Senlin and his small crew fly the skies in their ramshackle ship, The Stone Cloud. They act as pirates of sorts, using Senlin’s creative ploys to steal just a little from each ship they encounter. But Senlin needs more than stolen money and goods to make it to his wife Marya. He needs a way into the heavily guarded tower ring of Pelphia, where he believes she now resides.

The crew’s search brings them into contact with some of the most powerful people in the tower, including the Sphinx himself. What will Senlin have to sacrifice to those in power see Marya again? Is he willing to ask Edith and the others to pay the price with him? Senlin wrestles with this as well as with why Ogire’s painting keeps popping up wherever they go and why Marya keeps visiting him in hallucinations.

I read a lot of high fantasy as it’s probably my favorite genre. Even though I enjoy most of the fantasy series I read, a similar storyline and common vein runs through many of them. That’s not the case with The Books of Babel series. Bancroft’s idea is original and exciting. The world he’s contained in this tower is broad, imaginative, and ingenious. The characters he’s crafted are distinct and have grown on me over the course of the first two books in this trilogy.

Even though I love the world and characters he’s established, Bancroft’s prose is the highlight of the series. It’s quirky, smart, and so very engaging. He’s descriptive without being overbearing and is also quite funny. I listened to this book in audio form and found myself chuckling out loud time and again at the witty lines and turns of phrase. His sense of humor is further explored in the snippets that open each chapter. They are quotes from books contained in this fictional world and do two things at once: drop hints that add to the story and, at times, show the ridiculousness of some of the mindsets in the tower.

I am so excited the finale comes out next month and wouldn’t want to wait a day longer to see how this tale concludes! I definitely recommend this series to anyone who loves a good high fantasy read.

Let us know what you think about Arm of the Sphinx in the comments! No spoilers on this page, please!

Ready to read Arm of the Sphinx? Click to buy and help us pay for hosting.

I got this beauty at an event with Erin Morgenste