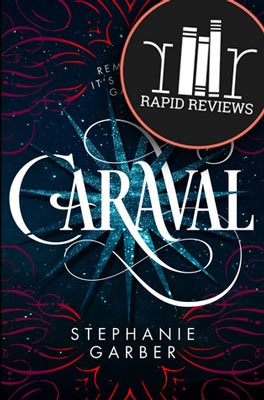 No spoilers in this review of Caraval by Stephanie Garber. I give it 4 stars!

I enjoyed this book! It had many twists and turns that kept me invested in the plot and moving quickly through the story. Even though it was stressful at times, I considered it a light, fun read overall.

Scarlett has written to the Caraval master for years, hoping to win an elusive ticket to participate in the enigmatic game. To her surprise, she finally receives three tickets just ten days before her wedding day: one for her, one for her sister Donatella, and one for her fiancé, whom she has never met.

Scarlett is quickly swept into a magical world in which it’s very hard to distinguish what’s real and what’s make believe. She ends up being much more the center of the game than she ever imagined as she works to cipher the mysteries of this round of Caraval as well as previous rounds of the game.

I’ve heard this book compared to The Night Circus, but I think it’s much closer to the 90’s movie The Game. It’s a similar concept, except with a fairy tale-like feel. I loved the ambiguous characters, especially Julian. I relished the myriad of descriptions of this world. Some of the metaphors are a little far-fetched (and there are many metaphors). But I think that’s okay in a world like Caraval; they added to the mystique and drew a clear picture of this unusual setting in my mind.

I have a couple complaints: (1) The rules of game and the magic contained within it are a bit nebulous. I understand that the reader has to be kept in the dark about some of them to be surprised later on. But I wish there were a few more ground rules established up front. (2) Scarlett’s deductions were hard to follow. She seemed to take pretty big leaps to figure several clues out. Her conclusions occasionally seemed more like devices necessary to carry the plot along instead of logical choices a contestant might make. With that being said, I still enjoyed this book and definitely recommend it! It was entertaining and total escapism for me. And that epilogue set up a book two that I’m excited to read!

Let us know what you think about Caraval in the comments! No spoilers on this page please. 🙂

Ready to read Caraval? Click to buy and help us pay for hosting.

3 thoughts on “Rapid Review of Caraval”