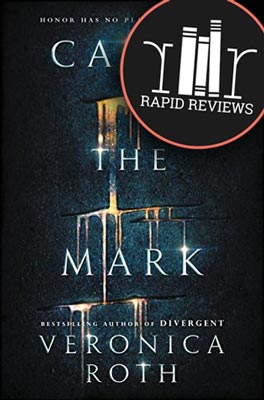 No spoilers in this review of Carve the Mark by Veronica Roth. I give it 4 stars! It’s a good read! In my opinion, Roth redeemed herself in many ways after the Allegiant debacle with this novel.

Carve the Mark takes place in a galaxy with nine unique planets. The population on most planets is united, but the planet our main characters inhabit is divided. The ruling class is called Thuvhesit, and on the other side of the planet is a dissenting group called the Shotet.

A force called the current runs throughout this galaxy. The current manifests itself in certain people on each planet, giving them currentgifts, which take many forms. In addition to gifts, certain people are given fates, a reliable prediction of their future as seen by Oracles.

Roth tells the story in alternating viewpoints from the two main characters, Cyra and Akos. Akos is Thuvhesit, and Cyra is Shotet. Each is blessed with a currentgift, and each is also fated. Their gifts (and possibly their fates) bring them together; however, it’s not under good circumstances. Plus, they’re supposed to be enemies. Their nations are each fighting to rule their planet and maybe other parts of the galaxy, too.

I have read a lot of high fantasy lately and welcomed this sci-fi for a change. The world building is perhaps a bit subtle, but I enjoyed it. Roth mentions many planets and races, and she gives us at least an inkling of what makes each unique. Hopefully she will build on this foundation in book two. I have a feeling we will be on quite a journey to see who triumphs in the race to rule the planet (and perhaps the galaxy).

Roth has a smooth writing style in this novel, reminiscent of Divergent and Insurgent. It’s not flashy but is efficient and well-paced for gradual, genuine character development. This is especially true for Akos and Cyra, who I got to know well and really liked. They grow individually and also learn from each other over the course of the story. Interestingly, Cyra’s chapters are written in first person and Akos’ chapters are in third person, yet I felt equally drawn to both viewpoints.

I had hoped for either a bigger surprise or a little more of a cliffhanger at the end. There’s a little of each, but not on the scale I was hoping. All in all, I liked this book and definitely recommend it! I’m excited to see what’s next for Cyra and Akos!

Let us know what you think about Carve the Mark in the comments! No spoilers on this page please.

Ready to read Carve the Mark? Click to buy and help us pay for hosting.

2 thoughts on “Rapid Review of Carve the Mark”