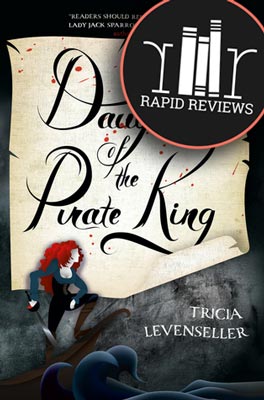 No spoilers in this review of Daughter of the Pirate King by Tricia Levenseller. I give it 4 stars! This book was fun from start to finish. Levenseller sets a good pace for her story and strings us along with fun banter on nearly every page.

As unusual as it is for her age and gender, Alosa is a young pirate who already has her own ship and crew. Her father is also a pirate (the king of pirates, to be exact), so she has learned from the best. Alosa’s father wants her to track down a piece of a map that supposedly leads to a long-lost treasure. She needs to board another ship to search for the map, so she gets kidnapped (on purpose) to gain access to these pirates and their ship. The former captain recently passed away, and his eldest son Draxen is the new leader aboard this ship. His younger brother Riden is the first mate and is assigned to keep an eye on and question Alosa. These two continually try to outsmart each other and interpret the other’s true motives.

This isn’t a story where the characters experience a lot of growth. It’s a mystery in which, right along with Alosa, readers slowly discover what’s important about the map, whether it’s even aboard this ship to begin with, and what the true intentions of the various pirates are. Alosa is a courageous, smart, witty main character who I loved from page one. I liked how her personality coupled with Riden’s even though they were on opposing sides. Finally, a touch of magic is introduced later in the story. It’s fun, unique, and sure to be explored further in the sequel.

I enjoyed this book and definitely recommend it! There are a few gritty plot points, but it’s predominantly on the younger side of YA, which is refreshing when so many YA books are hovering on the YA/NA line.

Let us know what you think about Daughter of the Pirate King in the comments! No spoilers on this page please.

Ready to read Daughter of the Pirate King? Click to buy and help us pay for hosting.

2 thoughts on “Rapid Review of Daughter of the Pirate King”