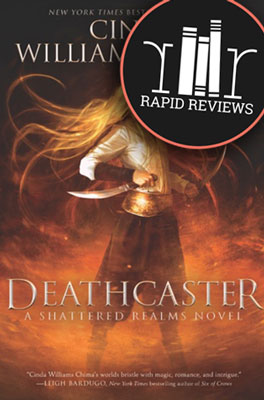 No spoilers in this review of Deathcaster by Cinda Williams Chima. I really liked this book and give it 4.5 stars! I rounded the 4.5 stars down to 4, however, because I didn’t love it as much as The Crimson Crown, the finale of Seven Realms, the predecessor series. Each book in that series was better than the last, culminating in one of my all-time favorite finales.

Even though it lacked a little of the action-packed and emotional punch of The Crimson Crown, Deathcaster was a fitting conclusion overall. How lucky are we as readers that we got eight books in this world? Being in the Seven Realms with Han and Raisa and then later Ash and Lyss has been a treat, and I’m sad that my time with them has come to a close!

The main characters in the previous three books in this series are scattered far and wide when Deathcaster opens. They’re each working against Celestine, their common enemy, in their own way using their unique skill sets. Many characters are eventually reunited, and each of these reunions tugged at my heartstrings. They must work together to have any hope of defeating Celestine, but to complicate matters, a few are quietly working against each other.

Chima shines in character development and world-building. It’s all achieved slowly, closer to the pace of an adult fantasy than a YA fantasy. And this isn’t a criticism. We know these characters and these realms well because of how Chima deliberately, beautifully built this world and these stories. And I loved every minute of it. She is simply one of the very best in the YA industry today.

I wanted just a little more in this finale, though. I wish the final battle was more epic, and I wanted an epilogue or one last gathering of all the major players. There was a set-up for a perfect final scene where we could get updates on everyone we’ve grown to love. Chima dangled the carrot and then didn’t give us this scene, which I think would’ve served as a love letter to the fans. Don’t get me wrong; we know how each character’s tale ended as well as which romantic pairings worked out. All besides one pairing, that is, one that I’d wondered about for nearly the whole series. Did they or didn’t they end up together?

Nevertheless, this was a great book and a fantastic series. I recommend all YA fantasy readers pick it up. The writing is smart and smooth. The YA tone is spot-on. The characters and their challenges are real. And the magic adds just the right touch of, well, magic to the story. I hope Chima will eventually bless us with an epilogue in novella form. I’d love to journey back to the Seven Realms and see what everyone has been up to!

Let us know what you think about Deathcaster in the comments! No spoilers on this page please!

Ready to read Deathcaster Click to buy and help us pay for hosting.

2 thoughts on “Rapid Review of Deathcaster”