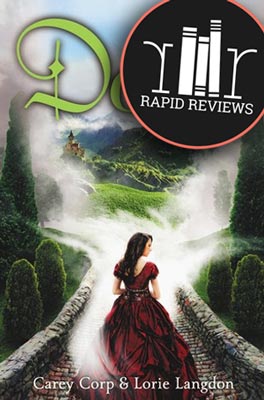 Check out this review by our guest blogger, Jacee!

No spoilers in this rapid review of Doon. I give it 4 stars.

Although the book had a slow start, I thoroughly enjoyed the magical world of Doon. When I read the description of this book, I was immediately interested because the idea of the main characters falling into a world of pure fantasy sounded too promising to pass up. The book did not disappoint, and I was excited to find out that Doon‘s magic continues in the sequel, Destined for Doon.

Doon focuses on two best friends, Veronica and Mackenna, alternating from each of their points of view. Veronica, hoping to escape from her life’s many troubles, agrees to spend the summer with Mackenna in Scotland. But everything changes when Veronica begins to have visions of a mysterious boy in a Scottish kilt.

Mackenna is convinced Veronica’s visions are only her imagination. Then the friends find a pair of rings that belonged to Mackenna’s aunt and uncle. When Veronica sneaks out late one night with the rings, Mackenna has no choice but to follow. The girls end up at Scotland’s Brig o’ Doon. While wearing the rings, they cross the bridge and end up in a world greater than any fantasy…and it is real, along with the boy from Veronica’s visions. But upon entering the land of Doon, the kingdom begins to change, and Doon’s fate could lie in the hands of Veronica and Mackenna.

Doon was a fun fantasy read! I will definitely read the rest of the series. The fantasy seemed almost believable, and the world of Doon was lush and well-developed. I would recommend this book to fans of fantasy and fairy tales alike.

Let us know what you think about Doon in the comments! No spoilers on this page please!

Ready to read Doon? Click to buy and help us pay for hosting.

I love love love A Christmas Carol. What are some

February 16, 2021
A Court of Silver Flames (A Court of Thorns and Roses #4) Read a full recap of the other books in this series (spoilers!).