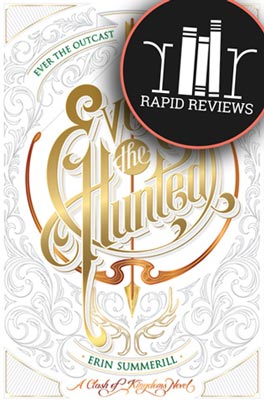 No spoilers in this review of Ever the Hunted by Erin Summerill! I give it 4 stars.

I read Ever the Hunted quicker than I have read a book in quite some time. It captured me from the first page and never let go. This was due in part to Summerill’s whimsical descriptions, in part to the mysteries in the plot, and in part to the love story.

Britta Flannery is all alone. Her best friend Cohen, her father’s apprentice for years who she may have been a little bit in love with, disappeared without a goodbye over a year ago. Now she has lost her father, the only parent who raised her. She is homebound after his death for two months, the proper mourning period in Malan. Britta is branded an outcast by society, so no one brings her food or checks on her. Thus, she emerges from her mourning starving and poaches an elk off the king’s land.

STACY’S BOOK RATING
I give it 4.0 stars overall.
Lets be friends on Goodreads:

She is captured for this offense, which is punishable by death. But she can be absolved of her crime if she hunts down her father’s killer. The complication: The wanted man is Cohen. Britta worked side-by-side with her best friend as her father trained him to be the king’s next bounty hunter, so she is enlisted to help because she is the most likely person to find him. She eventually agrees to track Cohen, sets off on this trek with three of the king’s guards, and quickly discovers nothing is as it seems.

The book’s pacing felt just right, not too fast and not too slow. Britta is a likable main character, a believably tough and smart heroine. I enjoyed trying to solve the crime and a few other mysteries along with her. Some were fairly easy to figure out; some surprised me, especially the one introduced at the end of the book. The magic (oh yes, there’s magic!) in the book is fresh and unique, especially in the case of a character who is a human lie detector, able to discern each through a feeling in her gut: truths as warmth and lies as ice.

I didn’t see many Goodreads friends give this book a high rating, but I really enjoyed it! Maybe I was just in the perfect mood for a book like this when I read it, but I don’t think that is the case. I think Summerill’s writing style is appealing and her plot and characters are compelling. I definitely recommend Ever the Hunted and am excited for book two, Ever the Brave, to see what’s next for Britta! One final random thought: I really enjoyed the line in the book in which the title appears.

Let us know what you think about Ever the Hunted in the comments! No spoilers on this page please. 🙂

Ready to read Ever the Hunted? Click to buy and help us pay for hosting.