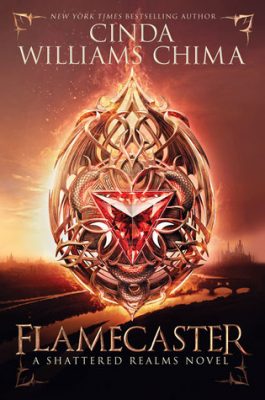 No spoilers in this review of Flamecaster by Cinda Williams Chima!

I loved it! I give it 4.25 stars! It is a great start to the new Shattered Realms series!

I was SO excited when I heard Cinda Williams Chima was returning to the Seven Realms universe, and the debut in this new series lived up to my high expectations. I can’t think of any world since Harry Potter where I love the portrayal of magic as much as I do here…the way that flash is stored in amulets, the talismans and other clan-made pieces, and the magical auras visible to other mages, to name a few.

The story centers on Adrian sul’Han (a.k.a. Ash) and Jenna Bandelow, two characters dwelling in different parts of the Seven Realms. They live in a tumultuous world in which one king is trying to conquer and rule the entire realm (all seven kingdoms). His conquests threaten both Ash and Jenna, and eventually their paths cross. I can’t say much more about the plot without spoilers, so I’ll stop there.

Since there will be four books in this series, Chima could take her time exploring the backstories of both main characters. We got insight into the personalities of several secondary characters as well, primarily Lila Barrowhill and Destin Karn, both of which I liked. I also liked the physical descriptions of each character, especially Jenna, which formed firm pictures of the characters in my mind. I just felt really tied to Jenna in general. Her hopeful, strong, yet at times almost innocent nature despite all she’s been through was refreshing!

One last character plug…I seem to always find a secondary character who I latch onto (i.e., Rhys in A Court of Thorns and Roses and Roar in Under the Never Sky). In Flamecaster, it was Evan Strangward! Every word he spoke intrigued me. The descriptions of Strangward and his whole crew captivated me. I hope we see a lot more of him in the rest of this series.

The moments of humor were really nice. In spite of the overall serious nature of the story, I found myself chuckling many times over the thoughts, words, and antics of many characters, especially Lila and Ash. I am a sucker for tie-ins from the old series, so I also really enjoyed the old places and characters (Sorry, it’s spoilery to say who!) either seen or at least referenced.

The reveals at the end of the book are SO good, one of which totally blindsided me! It adds a brand new element of magic to this universe, and I am REALLY EXCITED about it!

This book is a must-read for everyone, especially those of you who have read Chima’s past works! Even if you haven’t, this is a great place to start. Or go back to the very beginning and read the fabulous Seven Realms series, starting with The Demon King. These series are high fantasy at its finest!

P.S. The audiobook is so much fun, particularly because of the various accents the reader takes on. I had never imagined what characters in the Seven Realms might sound like, but I loved hearing variations of what sounded like British, Scottish, and other European accents from characters hailing from different regions of the Seven Realms. The accents made perfect sense to me and really added to my understanding of the characters.

Let us know what you think about Flamecaster in the comments! No spoilers on this page please. 🙂