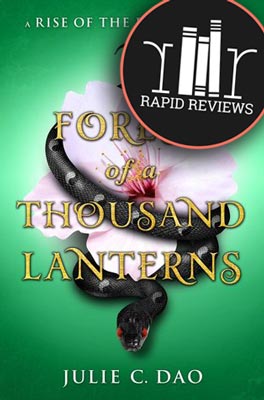 No spoilers in this review of Forest of a Thousand Lanterns by Julie C. Dao. I give it 4.25 stars. Overall, I really enjoyed it! By far the most fun reviews to write are the ones on books I feel passionate about, whether the emotions are positive or negative. Surprisingly, I had both reactions to this book. Parts of it felt like a three-star read; parts of it were definitely worth five stars.

Forest is about Xifeng, a beautiful young lady raised by her aunt. All her life, her aunt has predicted through tarot card readings that Xifeng is destined for greatness. The cards give her an inkling of the path she should follow, and soon Xifeng decides it’s time to take matters into her own hands and hasten her destiny. She journeys to Feng Lu’s capital and attempts to maneuver her way higher and higher in the royal court. The series title, Rise of the Empress, lets readers know Xifeng’s predicted fate. And the author establishes early on that she might become an anti-hero of sorts, depending on the path she chooses as she tries to rise to greatness.

This sounds exciting, right? Yet the story got off to a slow start. Building blocks were laid for the foundation of the story, which picked up later on, but it took me longer than I hoped to get into it.

Another complaint: Xifeng wasn’t overly likable. I love an anti-hero story if it’s done properly. Marissa Meyer is a master of this, in my opinion, as she established in Fairest and Heartless, my two favorites of her novels. Why, even though I knew it was coming the whole time, did the characters’ evil turn hurt my heart so much? Because initially they were lovable! I felt sorry for them because of all they had to endure. I hoped against hope bad things wouldn’t happen to them and unfortunate events wouldn’t change their innocent hearts.

In Forest, Xifeng lacked the initial innocence and goodness that makes for a sympathetic character. Her inner monologue displayed arrogance and selfishness from the start. She fought it to some extent but not nearly as much as necessary to make me feel for her. Plus, her decisions were erratic and even confusing at times.

One last complaint before I get to the many things I loved. The evil presence in this novel was disturbing. Dao did a great job establishing the malevolence since it affected me so, yet the dark, vicious turns were hard to swallow. It’s difficult to prove my point here without spoilers, so I’ll just leave it at that.

Now on to the good stuff! 😉 I’m impressed with Dao’s debut novel, both with her plot and her writing style. Her prose was intelligent and appealing. Each phrase seemed meticulously chosen. I found myself hanging on every word and trying to decipher every cryptic conversation. This explanation bleeds into my praise for the plot, too. Dao used countless ambiguous statements and introduced plenty of potentially shady characters, and the story felt chock full of mystery because of it. I was constantly wondering who was a friend and who was a foe as well as which characters the tarot cards represented, and I loved this about it!!!

I usually don’t include quotes in my reviews, but this one so beautifully sums up Xifeng’s focus that I wanted to mention it here. One character asks her, “Do you believe in destiny?” Xifeng responds, “It rules my life. I believe our lives have already been decided, and it is our purpose to make the choices that lead us to that fate.” The questions that hovered in my mind as I read were: Does she have her true fate figured out? And, if so, is it a path she honestly desires?

Even though the negative seemed predominant in this review, I really enjoyed this book and absolutely recommend it! At times I was delighted; at times I was disgusted. But as I think about the book as a whole, the complicated, interweaving plot tips the scales toward the positive. Beginning around the halfway point, I felt like I needed to absorb every detail because it could potentially be important and capitalized on later in the book. And that’s a feeling I savor! I can’t get my hands on book 2 soon enough!

P.S. I thought the title was wordy and a bit silly when I started the book. By the end, I realized its importance and think it’s quite fitting. The scenes it symbolizes ended up being really cool!

P.P.S. One (spoiler-free) question to ponder once you finish the book: Are the two characters who ended up outside the city by the end of book 1 at the same place?! I think they might be! Sound off in the comments to let me know if you caught this, too. I’d love to hear predictions other readers have about this circumstance. Please mark your comment clearly if it contains spoilers!

Let us know what you think about Forest of a Thousand Lanterns in the comments! No spoilers on this page, please!

Ready to read Forest of a Thousand Lanterns? Click to buy and help us pay for hosting.

4 thoughts on “Rapid Review of Forest of a Thousand Lanterns”