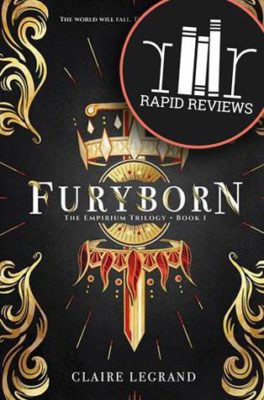 No spoilers in this rapid review of Furyborn by Claire Legrand. I really liked it and give it 4.5 stars. This is the best series opener I’ve read in a while. So many fantasy series have debuted in the past few years, and we see common themes among them: A kingdom is in turmoil for some reason or the other, and the protagonists must fight for what’s right—and often for their lives—to save their people. (This isn’t a knock; I love high fantasy! That’s why I read so many of these series.) Yet Furyborn has a unique premise nestled in among these similar themes.

Legrand introduced this premise in the prologue. It’s a scene that appears to show how one story ends and the other begins. It divides the book, and we then follow two women living a thousand years apart. We backtrack to Rielle, the character in the past, to discover how she got to the state in which we see her in the prologue. We also skip forward to see what Eliana, the future character, has been up to in the ensuing years.

Each of these women exhibit skills which indicate they might be the Sun Queen (a good thing) or the Blood Queen (a bad thing) prophesied about many years ago. Simon, a boy seemingly in the right place at the right time, connects these women when he’s placed at the center of it all. His surprise appearance several different times in the book was a delight. (Needless to say—and I know I’m probably in the minority here—Simon is my favorite character. I just had to throw that out there!) I’ll leave the plot summary at this because I don’t want to give too much away.

I love how my mind kept drifting back to the prologue again and again, wondering exactly what it meant. Against this backdrop, Legrand created complex, conflicted characters who were forced to make desperate choices, and their progression and development was logical. They forged real relationships, and they were forced to ferret out whose words were true and whose were dripping with lies. Legrand also concocted an interesting magical system and introduced a magic-centered contest to boot. And she incorporated love stories, heavenly beings, court politics, and family drama into her tale as well.

Legrand has a straightforward yet seasoned writing style. I wouldn’t put here up there with favorites like Bardugo or Scwhab, but I’d definitely put her in the upper tier of YA authors I’ve read. Can you tell I enjoyed this book as I rave about so many aspects of it? 😉 My advice: Even if the prologue throws you for a loop at first, stick it out! I was especially hooked by the time I got to the one-third mark. I think most readers will be addicted by this point like I was.

Quick caveat, though: This book is not meant for young readers because of language and a couple of explicit adult situations. So I recommend this book for mature YA readers only. I can’t wait to see what Legrand does with book two. She raised and answered many questions in Furyborn, yet many remain for the next installment. I wish I had it in hand now!

Let us know what you think about Furyborn in the comments! No spoilers on this page, please!

Ready to read Furyborn? Click to buy and help us pay for hosting.