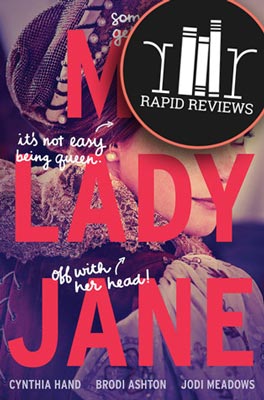 No spoilers in this review of My Lady Jane by Brodi Ashton, Cynthia Hand, and Jodi Meadows. I give it 4.25 stars!

My Lady Jane is perhaps the most fun (and funny) book I’ve ever read. (And by “read,” I mean listened to. The very British narrator on the audiobook is fabulous and adds so much to the experience!) The update I posted on my Goodreads account when I was just beginning the book sums up my feelings about the story quite nicely…”This book is glorious!!! It is cheeky and silly, yet it has heart and an almost fairy tale-like feel. I have laughed out loud more in the first 30% of it than I have in any other book in years.” And the laughter continued for the remainder of the book.

My Lady Jane tells the story of the short reign of Henry VIII’s only son Edward. It recounts his decision (hastened by a close advisor) to change his successor as he lies on his sick bed. Other noteworthy people in the story include Lady Jane Grey, Queen Mary I (aka Bloody Mary), and Mary, Queen of Scots, to name a few. In case you’re not familiar with this part of history, I will leave it at that so as to not spoil any part of the book.

As I do with any book making historical references, I googled the characters because the internet is, of course, the most accurate source of information. 😉 I discovered the book contains more historical accuracy than I would have guessed. Most of the history I knew regarding this era (before the aforementioned google) was from two television programs: The Tudors and Reign. I enjoyed seeing characters I knew from these shows referenced and watching their fates weave together in this version of the story.

While the authors get the characters’ names and at least part of their stories right, they also get much of it wrong and are very up front about the liberties they are taking. They even do an interlude at the beginning of Part 2 to advise readers they’re going to make even further departures from historical facts. Each modification means more antics and more hilarity.

The main divergence from fact involves magic. In this version of England, certain citizens can transform into animals, some at will and some involuntarily. This is a controversial topic, as diversity unfortunately tends to be in many societies. Those in support of the transformers are called E∂ians (the name also given to those who can change into animal form), and those against it are called Verities. As different members of the royal family vie for the throne, where they stand on the E∂ian issue becomes increasingly important. The authors kept me guessing until the very end as far as who would triumph in the race to rule England and who would survive despite their historical fate.

There is an over-the-top feel to both the storyline and the narrative, but I say this in the most endearing manner possible. It is not a negative in any way! One last thought…I did not initially spot these on my own, but from what I have read online: There are references to The Princess Bride and Monty Python throughout the book, and one character is continually “originating” Shakespeare quotes. So watch for these allusions as you read!

I highly recommend this book! It is unique, clever, and wonderful! Don’t go into it expecting heavy, intellectual subject matter. Instead, go into it expecting a lighthearted story and hours of entertainment. I am off to search for more books written by these three ladies!

P.S. After some Goodreads research, I have discovered these authors have two similar books planned:

Let us know what you think about My Lady Jane in the comments! No spoilers on this page please. 🙂

Ready to read My Lady Jane? Click to buy and help us pay for hosting.