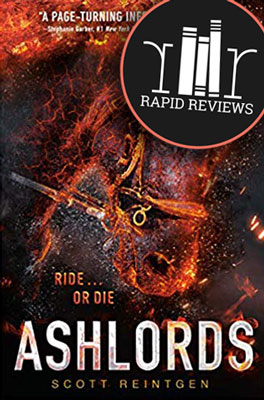 No spoilers in this rapid review of Ashlords by Scott Reintgen. I liked it and give it 3.5 stars. This is the first of Scott Reintgen’s book I’ve read, and it won’t be my last. He has a fresh, straightforward style that I appreciate, and both his plot and characters were intriguing.

Ashlords follows three teens preparing to ride in The Races, an annual event that pits different cultures within the empire against each other in an attempt to replace warfare. Entrants participate in a multi-day event riding phoenix horses, which, as the name suggests, combust each night and then rise from the ashes the next morning. The three riders featured in the book are from very different backgrounds and have diverse goals for competing in The Races.

Pippa is the favorite. Her family has a history of winning The Races, and her parents’ expectations are that she’ll do the same. Adrian is the son of a revolutionary and the prize of his people. He’s strong, well trained, and confident, the perfect combination to upset the favorite and win the race. Imelda, who entered The Races on scholarship, is perhaps the least likely to win. She’s a decent rider but is not trained in combat, which might be necessary if she encounters a fellow competitor as she rides. Her skill lies in the alchemy of the event, devising just the right compound to mix with her horse’s ashes to get the perfect beast when it rises the next morning.

Ashlords has a Hunger Games vibe as these competitors from different areas of the empire come together to prep and train for The Race. They ultimately compete against each other in a televised spectacle. There can only be one winner, of course, and that person is crowned Champion, receiving the acclaim glory that goes along with the title. The stark difference from the Hunger Games is that murder is not allowed in The Races. Racers can scheme and fight, but anyone who kills a fellow competitor is disqualified.

Reintgen spent a surprising amount of time in the build-up to The Race, but I enjoyed getting to know the characters and their motivations before the competition began. The most exciting part of the book, of course, was when the event commenced and the action truly began. Betrayals occurred and unlikely alliances formed. These alliances were my favorite part of the story. I kept asking myself: Can Pippa, Adrian, and Imelda place their trust in the new friends they’ve each found during The Race?

I’ve said it before; I’ll say it again. So many of the YA books these days stray to the very mature side of the spectrum. I’m happy to say that Ashlords felt like true YA in its themes and style. I recommend this book to fans of the Hunger Games series as well as The Scorpio Races, another book about horse races (one that I HIGHLY recommend, by the way).

Let us know what you think about Ashlords in the comments! No spoilers on this page, please!

Ready to read Ashlords? Click to buy and help us pay for hosting. We also recommend Scott Reintgen’s other series, The Nyxia Triad.