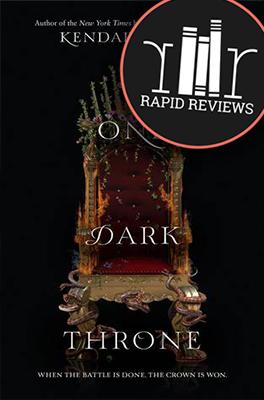 No spoilers in this rapid review of One Dark Throne by Kendare Blake. Just like with book one, Three Dark Crowns, I thought this sequel was just okay. I give it 2.75 stars.

The plot continues the main storyline from Three Dark Crowns. The triplets—Katharine, Mirabella, and Arsinoe—still plan to battle it out for the throne. According to the traditions in their nation, only one of them will be left standing at the end of the Ascension Year. They must use their wits and the magical gifts with which they’ve been blessed to come out on top, with the crown on their head and both of their sisters dead. This reality is becoming harder to accept for two of the three women. The third sister has no problem with these brutal terms. She’s changed a lot because of the events at the end of book one. Her personality is basically unrecognizable to everyone: her sisters, those who raised her, and the man she loves.

I feel the same way about both books so far in this series. The plot, setting, and characters are all just so-so. The writing is okay, doing a decent job of describing the scenes and characters and occasionally delighting me. But the dialog borders on cheesy at times. There are several characters I like, and they surprise me from time to time, which is fun. Yet even though I’ve noticed a little growth in a few of them, many characters feel one-dimensional.

STACY’S BOOK RATING
I give it 2.75 stars overall.
Lets be friends on Goodreads:

Both books plodded along slowly until the last 20% or so, when things finally picked up. But overall I think the story should’ve moved quicker and we should be further along in the sisters’ journey by now! I assumed this series was a duology when I finished Three Dark Crowns and was surprised to see there’s going to be a third book. And I recently noticed Goodreads now lists a fourth book, too. I could be wrong, but there doesn’t seem to be enough plot left to explore.

I hate being so negative for much of my review. It’s more fun to write reviews about books I love where there are plenty of positive things to say! But I have one last gripe about One Dark Throne. I’m still creeped out and confused by the continual mention of all the poison the Arrons and other poisoners consume. Blake repeatedly describes the toxins added to their food and drink, and I just don’t get the allure of it. Am I supposed to be awed? Impressed? Instead, it’s just disturbing to me.

This is not a book I’ll be telling my friends to read. But there is an enthusiastic readership out there, so don’t disregard it just on my account. Maybe you should pick up the first book in this series and give it a try! I plan on sticking with this series to write recaps for our readers. The Three Dark Crowns recap page is frequently visited, so I want to keep the summaries for this series going.

Let us know what you think about One Dark Throne in the comments! No spoilers on this page please. 🙂

Ready to read One Dark Throne? Click to buy and help us pay for hosting.