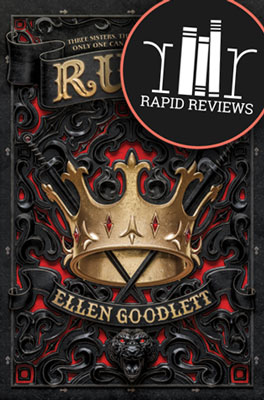 No spoilers in this rapid review of Rule by Ellen Goodlett. I liked it and give it 3.5 stars. Rule’s average Goodreads rating is on the lower side of the books I usually read. YA readers tend to rate good books over 4 stars and great above 4.3 stars. So I was worried about a rating of 3.63 stars. But the story sounded fascinating to me, and I wanted to give it a chance. I ended up pleasantly surprised overall!

In Rule, three girls discover they’re the long-lost daughters of the Kolonyan king. When the heir Nicolen is killed, the king brings these half sisters to Koloyna City to vie for the throne. The girls have been raised in vastly different environments. Nevertheless, they settle in (at least somewhat) to their new surroundings as the king begins to teach them what it takes to rule Koloyna. But the sisters each have a dark secret from their past, and these secrets begin to haunt them.

This sounds like a great set-up, right? It was! Goodlett threw in a little romance here and there, but for the most part, the story centered on the sisters competing for the throne, learning to navigate high society, and trying to keep their dark secrets hidden. Each sister had a unique voice and a unique skill set, and I enjoyed getting to know them. Additionally, Goodlett created an interesting magical system centered on the Blood Arts.

A mystery runs the full course of the story, and this intrigue pulled me along quickly as I tried to figure out who was behind the strange incidents. But I think Goodlett should’ve dropped a few more hints before she wrapped up book one. I have a guess or two about what’s going on, but too much was left open to interpretation. Even though another book is on its way, I wish a little more was revealed before the end of Rule.

Also, the description of the setting was lacking. I couldn’t see Kolonya City or the castle—the two places where we spend the majority of the book—very well in my mind. And even though I liked what I learned, I wish the Blood Arts system would’ve been explored a little more. I feel like Goodlett only scratched the surface of how it works. Hopefully both of these aspects of world building will be explored further in the next installment.

My biggest complaint, however, is that one love stories rubbed me the wrong way. It’s an affair in which stepfamily members were involved. In my opinion, the story would be better without this aspect, which felt a bit icky to me.

The story’s theme was similar to that of the Three Dark Crowns series, but I liked Rule better. I thought both the storytelling and prose were superior. So if you like that series, I suggest giving Rule a try! I will definitely be picking up a copy of Rise when it comes out. I want to see if my theories are correct and find out what’s next for these sisters.

Ready to read Rule? Click to buy and help us pay for hosting.