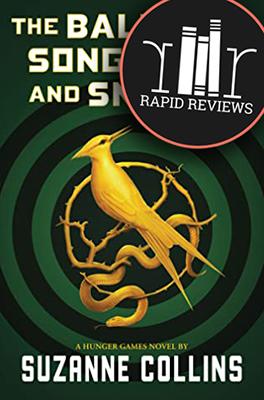 No spoilers in this rapid review of The Ballad of Songbirds and Snakes by Suzanne Collins. I liked it and give it 3.5 stars. It was incredible to be back in this world again; I never thought I’d get to read another book set in Panem. Immersing myself in Collins’ crisp prose again was great, too, though I wish she’d told the story in first person again. I didn’t feel as connected to Snow as I did to Katniss, although that’s mostly due to things other than narrative style.

Ballad is set in the past, 64 years before the first book in the Hunger Games trilogy. The Hunger Games is in its infancy and has looked quite different than the 74th that put Katniss in the arena. Many of the Games’ unique features are conceived this year, that of the 10th Hunger Games, however, and they’re features that are still around years later when Katniss participates.

We also learn about President Snow’s past when he’s just Coriolanus, a teenage student in the Capitol. His mother and father have died, and he lives with his grandmother and his cousin Tigris. (Am I the only one who didn’t know/remember that Snow and Tigris were related?!) The three of them must continually conceal that the Snow family fortune is gone and they’re barely getting by. So when the school announces that select students will serve as mentors for the tributes in the Games this year, Coriolanus prays he’s chosen to help increase his clout (and possibly his bank account).

The Gamemakers choose Coriolanus just as he’d hoped, but his luck soon turns when they assign him the female tribute from District 12, whom he considers to be the lowest of the low. Yet Snow’s tribute, Lucy Gray, quickly wins him over with her toughness and spirit. They bond before she enters the ring, and he suddenly wants her to survive as much as he wants the glory of mentoring a victor. Does Lucy Gray have what it takes to kill her fellow tributes? And how much influence can Snow wield in the Capitol to help her win?

Coriolanus starts out as a humble student, and we witness the beginning of his evolution into the president Katniss loathed. The transformation is interesting to witness, and I bought into parts of it. But Collins took some leaps, especially near the end of the book, that weren’t believable and felt too rushed.

I kept wondering whether Collins knew the details of Snow’s background as she was writing the original trilogy or if she developed much of it recently. My best guess is she came up with much of this story well after she finished Mockingjay. It’s been quite a while since I’ve read the first trilogy, but I don’t remember most of these details of Snow’s past even being hinted at.

Speaking of hints, there were little ones here and there about characters or family names we know from Katniss’ time frame, but there weren’t as many as I’d expected. Nevertheless, I enjoyed discovering Snow’s background and learning how some of the ideas for the games were developed. In fact, I really enjoyed the beginning and the end of the story, especially the epilogue. I just wish the middle hadn’t been slow and that the Snow’s progression toward villain didn’t feel as rushed.

Is this the last book set in the Hunger Games world? If not, you can better believe I’ll be back for the next one. I’d love a novel about Finnick’s original stint in the arena. How about you? Which character would you love to learn a little more about? Want to refresh your memory on the trilogy that started it all? Read our recaps of The Hunger Games, Catching Fire, and Mockingjay!

Let us know what you think about The Ballad of Songbirds and Snakes in the comments! No spoilers on this page, please!

Ready to read The Ballad of Songbirds and Snakes? Click to buy and help us pay for hosting.