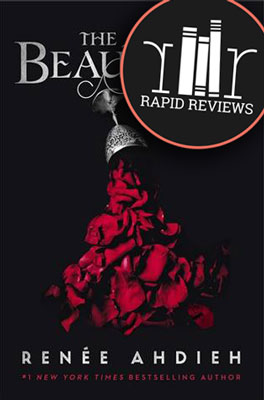 No spoilers in this rapid review of The Beautiful by Renee Ahdieh. This one started off slow for me, but it grew on me by the end. I decided on a rating of 3.0 stars.

This is the story of Celine, a young woman who flees France after a tragedy. She boards a ship bound for America and lands in New Orleans with a group of immigrant women who will live and work at a local convent. Before long, a local group who call themselves the Court of Lions catches Celine’s eye.

The two most intriguing members of the Court are Bastien, the handsome stranger Celine sees when she disembarks the transatlantic ship, and Odette, the gorgeous girl who buys all of the exquisite handkerchiefs Celine is selling in the local marketplace. Every member of the Court is as powerful as they are beautiful. Odette describes their various skills as magic, but Celine suspects that’s only a half truth.

When a string of murders hit New Orleans, each one striking close to Celine, she wonders if someone is coming after her because they know the reason she fled France. What’s plaguing the community is something far different than what Celine is imagining, though, and she’s caught in the midst of the crimes for an entirely different reason. Two men work against one another to try to keep Celine safe: Bastien and Michael, the local ace detective.

Just as I was diving into The Beautiful, I read a review that pointed out even though Celine repeatedly refers to Bastien as dangerous and a devil, he doesn’t display traits or commit acts on page to live up to it. I couldn’t agree more! Did Ahdieh just want to give him a bad boy feel? If so, she needed to show us instead of tell us!

I was afraid The Beautiful would be loaded with YA tropes because of the bad boy thing and a possible love triangle with Michael, Bastien, and Celine. This tainted my opinion of the story at first. The story did contain plenty of YA tropes, but it eventually became something more. My other main complaint is the multiple POV’s erased some of the mystery of the story, especially relating to Bastien’s actions. It would’ve been more fun trying to figure out what was going on in his head instead of reading it outright.

Yet the New Orleans setting fascinated me. I’ve never visited the city but felt immersed in its magic and idiosyncrasies. Celine was a good seamstress who studied under one of the greats in France, and this was a different and fun occupation to explore. I also enjoyed her fierce friendship with Pippa. It developed quickly, but I think it’s believable because of the situation they were thrust into.

Those were some things I liked; here are the two things that I loved. My favorite scene was the one where Michael is holding Celine at the station to protect her and his nonna and cousin bring them dinner. The conversation between Michael and Nonna was typical of one with a grandmother: loving, scolding, and a little embarrassing. Nonna felt more real to me than any other character in the book, and this was her only scene.

The other thing I loved were the two surprises at the end: one about Bastien and one I don’t even want to hint at. Being shocked is one of my favorite things as a reader, and I didn’t see either of these things coming. I feel like I’m leaving a gaping hole in my review because I’m omitting a glaring truth about this story. It’s a feature I knew about going in but realized isn’t in the Goodreads description. I don’t want to spoil it for anyone, so I’ll just say I haven’t read a story about this particular topic for several years. You might guess what it is from hints above, but I won’t say it outright.

I recommend this book to Ahdieh’s fans as well as for readers wanting to explore a YA fantasy set in old New Orleans. Oh yeah…That short epilogue?! I’m pretty sure I know what it means. How about you? 😉

Let us know what you think about The Beautiful in the comments! No spoilers on this page, please!

Ready to read The Beautiful? Click to buy and help us pay for hosting. (affiliate link)