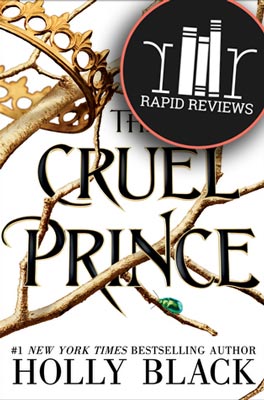 No spoilers in this rapid review of The Cruel Prince by Holly Black. I really liked it, and I give it 4.25 stars. I love reading book series because in later installments I’m immersed in familiar settings and surrounded by familiar characters. Even though this was the initial book in a series, the world and characters felt like familiar to me from page one. I was immediately immersed in the story, and I never felt off balance or confused as a reader. Hats off to Holly Black for making a new world seem like an old favorite!

The Cruel Prince tells the story of three sisters, human twins Jude and Taryn and their older half-fae half-sister Vivienne. The three spend first part of their childhood in the human world and then the next part among the fae. Despite her fae heritage, Vivienne longs to go back to the human world, while Jude and Taryn adjust well to living among the fae. Taryn wants to take a traditional life path, finding a fae male with which to marry and settle down, but Jude (the main character) longs to serve a fae lord as a knight.

There is turmoil among the fae in their homeland. The king has ruled for years but is preparing to name a successor from among his six sons. His subjects are convinced he’ll pick his third son Dain, the one he’s long favored, but many schemers have other plans and designs on the throne. Jude is glad the king’s youngest son Cardan, the one with whom she attends school, doesn’t seem to be in the running. Cardan and his posse are cruel and rude and seem bent on torturing anyone and everyone, especially Jude.

Don’t be alarmed! Even though I didn’t mention it above, the book featured a love story. In fact, there were several romantic storylines in Prince. They took paths that often surprised me. The main love story—if I can call it that—threw me just a bit. I think I was supposed to be fascinated by it and root for it. I was and I did, for the most part. But it was complicated, and they certainly weren’t a run-of-the-mill couple. It’s not the kind of relationship I typically root for, and it didn’t necessarily take the path I hoped for. Maybe that’s the beauty of it. I’m certainly excited to see how this relationship develops in book two.

Fae mythology is so rich and so much fun, and Black seamlessly incorporated many legends we know and love into her story. She also did a great job with the pacing in Prince; there was never a lull in the storytelling. Black sprinkled hints and clues throughout, many of which she capitalized on in this book and a few of which she has left to deal with in later books. I can’t wait to see what they all mean!

And then that climax. Wow! Black sure knows how to wrap up a book. The ending was my favorite kind. I’ll leave it at that so I’m not spoilery in any way, but let’s just say I’m very anxious to get my hands on book two! Can you tell I enjoyed this book from cover to cover? I definitely recommend it! Prince has many aspects I always look for in YA fantasy, yet it has a flavor and flair all its own.

Let us know what you think about The Cruel Prince in the comments! No spoilers on this page please!

Ready to read The Cruel Prince? Click to buy and help us pay for hosting.

See all of our book reviews.