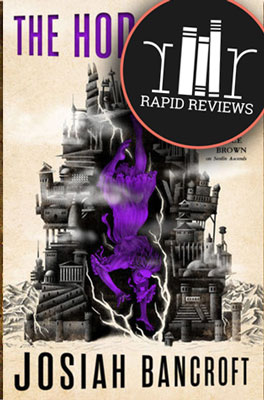 No spoilers in this rapid review of The Hod King by Josiah Bancroft. I really liked it and give it 4 stars. Bancroft dealt me a huge shock at the end of this book, unlike any I’ve had before. I thought this was the final book in the series, but I discovered it’s not.

As I edged closer to the end of The Hod King, I kept asking myself how Bancroft could possibly have time to wrap everything up. In the last chapter, I was beginning to wonder if he could achieve any sort of satisfying conclusion. I expected something revelatory and shocking, and I was confused when I read the last sentence.

Did I skip a chapter somewhere? Did I miss some hidden meaning? Or did I download an incomplete audiobook? I went to Bancroft’s website to investigate. I eventually found what I was beginning to suspect: This is not a trilogy as Goodreads suggests. A fourth and final book is on its way, due out next year (2020). I was surprised and disappointed.

Don’t get me wrong, I’d love to read more about these characters and this setting I’ve grown to love, all recorded in Bancroft’s exquisite prose. But I thought I would know the conclusion to Senlin’s story when I finished The Hod King. It’s something I’ve been longing to know since I read the first few chapters of book 1. Nevertheless, now that I’ve vented my frustration to save other readers from falling into this same “trilogy trap” I was caught in, I would love to talk about The Hod King. 😉

Bancroft tells this story differently than in the first two books: He tells it in separate sections wholly devoted to one or two of the main characters. I both liked and disliked this method. Part 1 is from Senlin’s point of view, part 2 is from Voleta and Iren’s, and part 3 is from Edith’s. While I enjoyed being immersed in each of these character’s exploits without any breaks—those frustrating cliffhangers at the end of one character’s chapter only have to wait three or four chapters before I get back to his/her point of view—it was harrowing to wonder what was going on with Senlin for the last two-thirds of the book.

One noteworthy thing about this set-up: We didn’t get any updates on Adam in this book. I believe where he’s stranded is key to understanding the Tower. Bancroft has deferred telling us what Adam has been up to until the finale. Does this fact reinforce my suspicion? Maybe.

These characters have been through a lot in the first two books, and they’re put through the wringer again in The Hod King. I am alternately proud of and frustrated by how each of them reacts to the situations they face and the new facts they learn. Each continues to grow and change as they face more adventures, hardships, and difficult decisions. I am most satisfied with Senlin’s transformation. He has gone from a meek school teacher and a dreamer to a world-wise, crafty leader. He’s a man with a plan. Always. No matter how inane the plans might seem (but rarely are).

I finally got the scene I was waiting for, and it was everything I was hoping for and then some. I loved the vulnerabilities and double meanings peppered throughout the section. And I loved how Senlin’s honor and verity bubbled to the surface as it always does. That’s all I’m going to say about the plot (and I know I haven’t said much) because I don’t want to spoil any of the developments in this third installment.

Despite the further character development and the world-building in Pelphia, the highlight of The Books of Babel continues to be Bancroft’s unrivaled prose. His word and phrase choices are inimitable, not to mention often ironic, clever, and entertaining. The quotes that lead into each chapter allow Bancroft’s wit to shine once again. This time they’re excerpts from the news stories of a Pelphian reporter and a book called I Sip a Cup of Wind (yes, you read that title right). I’m not sure who this author fellow is, but his musings on life are frivolous and comical.

Do I recommend this book? Of course I do!!! Why didn’t I rate it 4.5 stars (rounded to 5) like I did Arm of the Sphinx? The latter half of the book dragged in places, especially part 3, Edith’s section. Maybe it’s because we were immersed in a similar timeframe for a third stint, or maybe it’s because not as much was achieved in her section. But Bancroft has accomplished what few authors in the last several years have: He’s crafted a unique fantasy tale that’s written in nearly perfect prose. So pick up The Hod King immediately (or Senlin Ascends if you haven’t started The Books of Babel journey yet)! You won’t be disappointed!

Ready to read The Hod King? Click to buy and help us pay for hosting.

Let us know what you think about The Hod King in the comments! No spoilers on this page please!

#Lightbringer is out a week from today!!! This is easily one of my most anticipated reads of 2020. Need a refresher on the first two books in the series before buying the new release? We have recaps! #Furyborn #Kingsbane https://www.bookseriesrecaps.com/what-happened-in-kingsbane/