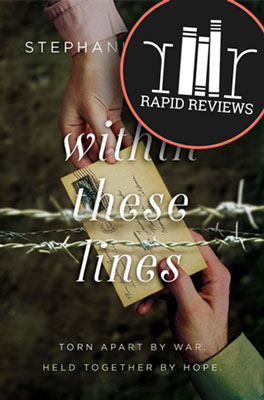 No spoilers in this rapid review of Within These Lines by Stephanie Morrill.

Within These Lines is both a heartfelt romance and a hard look into the degrading treatment of Japanese-Americans and immigrants during World War II. I highly recommend this YA historical romance. Readers will enjoy the perseverance of love in the face of adversity and will mourn with a people who were unjustly treated—many by their own country.

In 1941 California, Italian-American Evalina Cassano falls in love with Taichi Hamasaki, the son of Japanese immigrants. As if life isn’t hard enough for these two as they hide their scandalous inter-racial courtship, when Pearl Harbor is attacked, anti-Japanese feelings erupt around them. Taichi and his family are soon forced from their homes and their lives. Much of the San Francisco population cheers as they board a bus that will take them on a long grueling trip to the Manzanar Relocation Center.

While they are separated, Taichi must deal with the dangers and injustice of camp life. Factions arise among Manzanar’s crowded population, and Taichi and his family must find a way to survive among the violence. Evalina speaks out against anti-Japanese sentiments, doing the only thing she knows to do in a world filled with hate.

Both Taichi and Evalina must hold to their convictions and to the hope that their love will stand the test of these trying times.

Let us know what you think about Within These Lines in the comments!

Want to read Within These Lines? Click to buy and help us pay for hosting!

Oh and share this rapid review of Within These Lines with your friends!