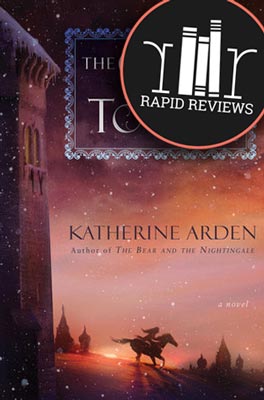 No spoilers in this review of The Girl in the Tower by Katherine Arden. I liked it and give it 4 stars. This sequel followed a similar path as the first book in the series for me. The story developed slowly (though with beautiful prose), and the action didn’t materialize until near the end of the book. I wouldn’t say I was bored, not exactly, but I read Tower slowly. Am I glad I pushed to the end? Absolutely!!! The payoff was worth it; the last 25% of the book was easily a 5-star read.

At the end of book 1, The Bear and the Nightingale, Vasya left home because she was afraid she’d continue to cause her family heartache. In the sequel, she runs straight to Morozko, and once again his words and actions surprise her. He gives her the provisions she needs to begin her big adventure: her solo journey to see the world. Traveling alone as a woman during this time period in Russia is ill-advised, so Vasya soon poses as a young man.

Villages are being pillaged and burned all around the region, and Vasya’s soft heart ends up pulling her to help those around her in need. She doesn’t make it very far on her journey since she’s assisting others along the way. This eventually brings her back into contact with her two beloved older siblings: Olga and Sasha. Will their relationships be what they used to be? They’re all fighting against the evil trying to overtake the city of Moscow, yet no one—not even her siblings—believes Vasya when she tells them who the perpetrator is. And does Morozko still watch over her? How does he fit into this picture, and what are his true desires and motives?

For readers who love a strong heroine, look no further than Vasya. She’s the toughest and feistiest of them all! She doesn’t fit the mold traditionalist Russian culture wants to put women in, and she’s not afraid to defy it, seek adventure, and try to chart her own path, all the while caring deeply for those around her. I can’t mention characters I loved without bringing up two others: Morozko and Solovey. Morozko is mysterious, complex, and contradictory. I found myself trying to decipher every phrase he utters right along with Vasya. And Solovey is an intelligent, verbal, supernatural horse who protects Vasya with his life. Need I say more?

Little did I know, I apparently love everything about Russia. The winter setting is captivating, and the mythology is intriguing. Russian lore with its spirit world is unlike that of other cultures. This spirit world, which only Vasya and a few others can see, is fascinating. Some of my favorite parts of the story are when the veil between worlds lifts and Vaysa fully steps into the other-world.

As I read the first 75% of Tower, however, I felt like I was watching the characters from afar. (Unless it was a scene with Morozko and Vasya, that is; I hung on every word in those scenes.) I didn’t feel like I was fully immersed in the plot or in the character’s emotions until near the end. But let me tell you, it’s worth the meandering pace to get to the end of the tale. The climax was powerful, heartbreaking, beautiful, and exciting, both the actual plot and the way Arden tells the story.

I definitely recommend this series! Even though the story progresses deliberately, I can’t say enough about the beautiful prose, the Russian setting and mythology, and the heroine. The title and cover of the third book set up an intriguing finale! I just discovered the pub date has been pushed back to January 9, 2019. I can barely wait to see how this story concludes!!! In the meantime, I might investigate the books Arden recommends for her readers interested in learning more about Russian history and mythology.

Let us know what you think about The Girl in the Tower in the comments! No spoilers on this page please.

Ready to read The Girl in the Tower? Click to buy and help us pay for hosting.