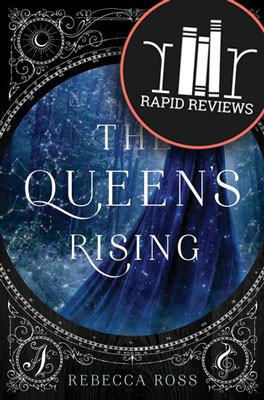 No spoilers in this rapid review of The Queen’s Rising by Rebecca Ross. I thought it was okay and give it 3 stars. There are so many YA high fantasy series out there right now and so many new authors trying to break into this crowded market. I’m not sure Ross does anything to separate herself from the masses, but Queen was a decent read overall.

Brienna has been raised by her maternal grandfather until she’s admitted to a school for passions, one of the five areas of study for young women. She hasn’t shown an affinity for any of the passions, but something her grandfather whispers to the headmistress (the Dowager) gains her admittance. Brienna suspects it’s about her father, whom she’s never met; in fact, she doesn’t even know his identity.

It takes Brienna three of her seven years at the school to settle on a passion. This puts her a bit behind, so she’s the only one of the six girls who doesn’t gain a patron—someone for whom she can act as an apprentice—at the end of her studies. She stays on for several extra months to study hard in hopes of gaining a patron.

When visions of the past begin plaguing Brienna, the Dowager knows it’s time for her to move on. She believes Brienna needs to be protected as she’s learning about her family through these ancestral memories. The Dowager brings a man named Jourdain to serve as her patron. Even though he seems to have as many secrets as Brienna, she trusts him because the Dowager does, and she agrees to serve as his apprentice and be part of his family.

Will Brienna fit in with the Jourdains, will the visions continue to expand her knowledge of her family and her past, and can she find a way to use her newfound knowledge to overthrow their evil king?

Queen started off slow, and that’s never good for a new series. I need something to grab me immediately to keep me flipping pages. And as an aspiring author, I know the heroine should leave on her journey around the 20% mark, yet it occurred much later for Brienna. Ross had built enough intrigue by that point, however, that I wanted to keep going.

Another sign that this book didn’t stick with me: I only finished it a few weeks ago, yet I had to look up the main character’s name to write this review. I had read several other books since then, but still…Yikes! I wish Brienna would’ve been more memorable.

I’ve been negative up until this point, so let me spell out the positive aspects of Queen. Ross surprised me a couple of times, and I always enjoy being surprised, especially when I should’ve saw it coming and didn’t, as was the case here. I enjoyed the sweet tension between Brienna and her love interest; Ross captured just the right tone for YA romance. And I liked the portions of the story told through visions of the past. This bit of magic was spontaneous and unusual.

Queen is true YA written for a young-ish audience, although readers of all ages might enjoy it. I’d recommend this book to people in search of clean teen fiction, especially those who enjoy high fantasy. I’m a little stumped as to who the antagonist will be and what drama will ensue in the second installment, The Queen’s Resistance, as there were so many resolutions as the end of book 1. But I’ll most likely pick up a copy to check it out later this year.

Let us know what you think about The Queen’s Rising in the comments! No spoilers on this page please!

Ready to read The Queen’s Rising? Click to buy and help us pay for hosting.