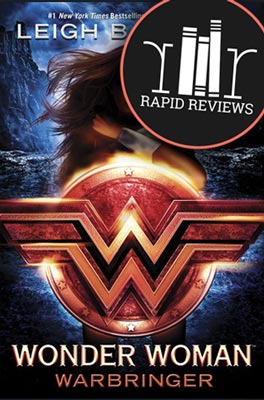 No spoilers in this review of Wonder Woman: Warbringer. I liked it and give it 3.75 stars. If the name ‘Leigh Bardugo’ is on the cover, you better believe I’m going to read it! And if the book is about superheroes, then that’s another vote in its favor. Warbringer wasn’t without flaws, but it was a fun ride overall!

The book is about young Diana Prince. Long before her superhero days, teenage Diana feels like she can’t live up to her mother’s expectations or those of the Amazon warriors she lives among. She’s dying to prove herself and ends up making a big mistake: She has contact without the outside world by rescuing the lone survivor of a shipwreck near the coast of her remote island home.

Diana discovers Alia, the girl she saved, is a Warbringer, a descendant of Helen of Troy who unwittingly sows discord and violence wherever she goes. The girls discover there is one way besides death to avoid the culmination of Alia’s evil influence. She must bathe in the waters where Helen of Troy rests. So Diana and Alia, along with Alia’s best friend Nim, her brother Jason, and her brother’s best friend Theo, end up on a race against the clock to wash Alia’s powers away before a global war erupts in her wake.

STACY’S BOOK RATING
I give it 3.75 stars overall.
Lets be friends on Goodreads:

Warbringer got off to a pretty good start. The opening scene was fun, setting up the world Diana grew up in and introducing her goal for the remainder of the book. The fun ramped up about a third of the way in when Diana made it to the modern world. Seeing Diana out and about in modern society was hilarious, just like in the recent movie. I couldn’t help but smile in chapter after chapter as I read about the way she sees things, the formal way she speaks, and the way she relates to everyone.

Then the story really hit its stride when the team was assembled. The banter and bickering among the five mains was great, easily my favorite part of the book! Bardugo’s writing is at its best when she has a cast of characters playing off each other. And even though we only see a small portion of their lives, all five characters were well developed. I quickly felt invested in and attached to each of them and enjoyed watching them bond as a group as they worked toward their goal.

Then the climax happened. Ugh! I was not happy about the surprise Bardugo dealt us. I’m not necessarily saying the twist wasn’t well executed. If I’m being honest, though, it could’ve used more foreshadowing. But more than anything, I just wasn’t fond of the turn the story took. I usually love being shocked as a reader, but it was not the case this time. Many readers might enjoy the twist; my displeasure could very well be a personal preference thing. It’s really hard to say much more without spoilers, so I’ll leave it at this.

Bardugo did a good job with the action throughout the book, both before and after the twist. And her prose was great, as always! So I recommend this story to superhero fans as well as Bardugo fans. I’m excited to read the other three YA superhero books coming out in the next couple years. Batman: Nightwalker by Marie Lu is coming next on January 2, 2018!

Let us know what you think about Wonder Woman: Warbringer in the comments! No spoilers on this page, please!

Ready to read Wonder Woman: Warbringer? Click to buy and help us pay for hosting.