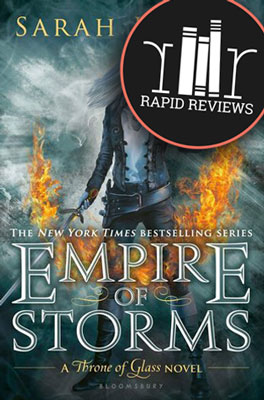 No spoilers in this review of Empire of Storms by Sarah J. Maas! After much consideration, I decided on an overall rating of 2.5 stars for this book. After a brief plot summary, I will dive into my rationale behind this rating.

At the end of Queen of Shadows, Aelin was approaching the border of Terrasen, her homeland. It seemed as if her reign as queen might begin soon. We learn very quickly in Empire of Storms that she still has a long road ahead of her before she can hope to ascend the throne and rule her people. She has to call on friends old and new as well as a few enemies to have any hope of triumphing over the new obstacles before her.

STACY’S BOOK RATING
I give it 2.5 stars overall.
Lets be friends on Goodreads:

Since it was hard to pin down the overall rating initially, I decided to do a likes/dislikes list, just like I did for A Court of Misty and Fury:

I give the last 20% of this book 4 stars. For me, the first 80% has its high and low points. The pacing is a bit slow, but there are some great scenes and exciting developments interspersed throughout. There was enough mature content to overshadow my enjoyment of many sections as I thought about young audiences reading these parts. So I give the first 80% 2 stars. This is why, in the end, I decided on an overall rating of 2.5 stars.

I recommend this book to fans of the series. We have already come this far and want to see the story through to the end, right? But I have to qualify this recommendation to mention that this book is not intended for younger YA audiences (like the first few books were). I am obliged to include this qualification so readers (and parents of readers) can make an informed decision before picking up this book and/or this series. But I will be picking up book six when it comes out next year. I need to see how Aelin and her crew conclude their journey!

Let us know what you think about Empire of Storms in the comments! No spoilers on this page please. 🙂

Ready to read Empire of Storms? Click to buy and help us pay for hosting.

9 thoughts on “Rapid Review of Empire of Storms”