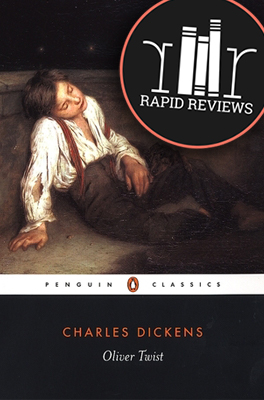 No spoilers in this review of Oliver Twist by Charles Dickens.

“Please sir, may I have some more?”

Dickens was a master of the written word, not just because he wrote well but because his words carried so much emotion that they evoked a response in even the most hardened souls. Although his books contain much prose to admire, most of his books are recognized by one phrase each. For Oliver Twist, that phrase is: “Please sir, may I have some more?” Such simple words, yet they convey so much. These are words chosen by a boy who knows he is addressing the masters of his food and his fate. He is aware their station in life is well above his, so much so that he cannot even assume to be given more gruel than his measly allotment.

Every phrase, every dialogue uttered by the characters in Oliver Twist is true to that character’s background, education, history, and station in life. Dickens had the unique ability to convey dialects through his writing. For those unaware of the skill, it is a highly specialized ability that involves writing an accent just as it is spoken. Suppressing sounds where the speaker does and almost creating an echo in the reader’s mind. Dickens was a master of dialects, and as such, his writing is fantastically expressive. For the same reason, his readings were immensely entertaining. In recent years, this style has been seen in the writing of Hagrid’s dialogues in the Harry Potter books by J.K. Rowling and the cockney accent by Jennifer Worth in Call the Midwife.

They say we are an aggregate of our experiences. I don’t know if I necessarily agree with this, but as a writer, I can agree that our experiences show up in our writing. Dickens was forced to work as a child when his father was arrested for not paying back his debt. Although he was able to go back to work, this left an indelible mark on his mind. His young characters often suffer great hardships and pain. Their pain and heartbreak are palpable through Dickens’ words. One can almost experience their heavy hearts and swollen eyes, which also earned his novels the statute of emotionally difficult reads.

A logical person may say it is perhaps this ability that makes Dickens a fantastic writer. However, being a writer myself, I may be inclined to say this is in some way indicative of his own emotions. Writers can create characters, situations, and dialogues, but most are inspired by their own emotions. For example, the character of Fagin was inspired by Issac ‘Ikey’ Solomon, who was introduced to a life of crime by his father and trained little children in street crimes. It was his appearance and reputation that stuck with Dickens, and he brought his day-to-day dealings to life in Oliver Twist through Fagin.

Although Dickens was born during the reign of King George III, the entire period largely became known as the Victorian Era. Strictly speaking, the Victorian era was from 1837 to 1901, but in reference, it is considered to have begun after the Napoleonic wars and lasted until the advent of the First World War in 1914. This was a period of immense social change on account of Britain’s transformation from a rural, agricultural society to an urban, industrialized one.

Large families, urban migration, and stigma and trauma of government help, including moving to the much-dreaded workhouses, were some of the causes of the dismal state of affairs. Dickens’ writing reflects the pains of those who struggled to survive in this changing society. His reflections and ruminations manifest in the experiences of young Oliver Twist, like when he was on his way to London and it was far safer for a boy under 10 years to sleep in haystacks rather than enter a village that threatens to imprison those who beg.

There is social commentary, and then there is Dickens’ keen portrayal of people. Consider the time when Noah Claypole, to be cruel to Oliver with maximum effect, called him “workhouse.” When calling that name did not produce the desired rage, he began to heap insults on his dead mother. Dickens’ genius is evident in his own words, which reflect great insight. Dickens writes that Noah “did what many small wits, with far greater reputations than Noah, sometimes do to this day, when they want to be funny. He got personal.” This is more than just an observation. This kind of experience is born of having lived a life where one is pushed to a brink of sensitivity that is almost empathetic. His time as a young child working in a factory is often spoken about in passing, yet it clearly had a deeper impact in that at least two of his books revolve around young boys who go through painful experiences.

Reading books by Dickens is not just a remarkable experience with the written word; it is also a rare opportunity to experience history. I noticed the phrase “sentenced to transportation” in the book, and although I knew crimes were punished by deporting people to the “New World,” the phrase was interesting to see. The manner in which it was written, without explanation and without ceremony was more fascinating to me than the mention of it at all. These practices have been studied, criticized, and either begrudgingly accepted or blatantly denied. But to see it mentioned in passing feels like watching a dinosaur walk past your apartment: One knows they existed, but to see one in the flesh is a completely different matter. I am sure you will experience similar epiphanies when reading Dickens. It is an experience akin to time travel.

Speaking of travel, did you know Dickens used to obsessively walk around London? He would walk the streets of London, almost 10 to 20 miles a day, and observe the sights, sounds, smells, people, and ambience. Everything he observed made it into his books and immortalized Victorian society for all time to come. Not everyone can observe things as they are without adjustment or wishful thinking getting in the way. To look at something for exactly what it is—whether it feels beautiful or ugly, whether it goes against your grain, or whether you approve of it—and then accept it and reproduce it just the same is a rare talent. The act in itself sounds simple, but how many of us can achieve it? Even as we watch events unfold in our daily lives, we make continuous judgements about them. Any time someone begins to speak, we form value judgements about everything that’s coming out of their mouth, especially nowadays when we are all just waiting to be offended.

Dickens accepted everything that existed in his time. In Oliver Twist, he tells us about the fate of an orphan boy in the 1800s without adding unnecessary kindness where one would not be experienced. When Oliver fails to return to Mr. Brownlow’s house that fateful night that Nancy takes him back to Fagin, Mr. Brownlow is inclined to believe Mr. Grimwig’s assessment of Oliver. We would have loved to read that he does not doubt Oliver for one minute, but such are not the ways of society. Even today, nine-year-old boys belonging to a band of thieves would be looked upon with suspicion. When Oliver’s mother died, we would have loved to read that Old Sally went looking for her family and reunited Oliver with them. This is not the way of the world, whether it is the Victorian world or the world we live in today. If an unknown pauper lies dying somewhere, their belongings will not be kept for safekeeping; they will most likely be stolen to be sold for some quick cash.

Dickens may not be the first choice when picking books to gift little children, but for the brave parent, it will be a wise choice. Reading Dickens will not only lay the foundation for an excellent vocabulary, the masterful weaving of words into beautiful prose, and early access to the truth of human nature, but also will allow children to understand history through the perspective of someone who lived it.

And if you are an adult returning to Dickens or reading him again after many years, you could not have picked a more edifying book. Perhaps you will find yourself saying:

“Please sir, may I have some more?”

Let us know what you think about this review of Oliver Twist and Sarina’s great review in the comments! No spoilers on this page, please!

Ready to read Oliver Twist? Click to buy and help us pay for hosting.