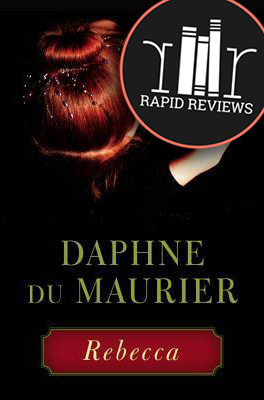 Spoilers exist in this review of the Rebecca by Daphne du Maurier.

One has read quotes and quotes about this book, and yet it does nothing to quell the thirst for it. Where the story should only incite fear and doom, it incites romanticism and an aching longing for the characters’ world. What is written as dread somehow transforms into infatuation in the reader’s mind; I know not how this happens, but I do know it is pure genius.

Never out of circulation since 1938, Rebecca firmly inhabits the best seller’s section of bookstores, and young readers constantly flock to revel in the world of Manderley. The story, told through the nameless current Mrs. de Winter, is a gripping tale of painful self-awareness and living in another’s shadow. The new Mrs. de Winter has always been painfully conscious of her so-called uninteresting and “young” self. In a world that has always prized youth over all else, it is mildly tragic and vastly amusing to see the new Mrs. de Winter pining to be older.

Her pain is made so much worse by the gradually solidifying figure of the first Mrs. de Winter: Rebecca. Rebecca was a mere shadow of the past, but she gradually comes alive through Mrs. Danvers, the morning room, the audacious red rhododendrons, the Happy Valley, the beach cottage, and the terrified Ben. One can even be forgiven for assuming Rebecca to have been a magnanimous, comforting, efficient creature and Maxim de Winter to be heartbroken beyond repair—almost like Margaret Mitchell’s Ellen and Gerald O’Hara in Gone With The Wind—until one reaches the last 100 pages.

A cold, calculating, condescending skeleton like Mrs. Danvers is as carefully plotted as a character can be through which to bring Rebecca alive. Some interpretations of the book claim her love for Rebecca to be romantic, deriving from du Maurier’s androgynous self. Whilst the affection is uncomfortable and obsessive, it may not be very different from any obsession a woman can harbor for another. Where an imposing, charming woman exists, there also exist shadows who wish to partake in the perfect life she possesses. Mrs. Danvers may be no different.

The evolution of the new Mrs. de Winter arrives as the ugly truth begins to rear its head and leads to a more endearing relationship between Maxim and his new wife. With her newfound confidence, the new Mrs. de Winter challenges Mrs. Danvers in a first attempt to reign supreme in Manderley.  Much like a battlefield, Manderley has seen its share of aggressors and rulers, and it is here that the new Mrs. de Winter stands up to her inner demons, relinquishes Rebecca to the shadow where she belongs, and begins to come into herself.

Providence has other plans though, and Rebecca’s victory was ensured in the end by Mrs. Danvers. One wonders whether this is where the author couldn’t control her moral compass. How could she let a murderer and a half-wit, mouse-like woman win? Surely the wronged and grandiose Rebecca deserved better. Or did she want to burn Manderley down so the readers would not pine after the real version, her dear Menabilly, and she could fool them into thinking no such estate existed and as such it mustn’t be sought?

The end truly is an end. What perishes with Manderley is the grandeur, the hope of a new beginning, the satisfaction of ridding Manderley of Mrs. Denvers, the joy of replacing the bloodthirsty driveway rhododendrons, the glum, the loveless moods of Maxim, the new Mrs. de Winter’s shadowy self, and the morning room, which may as well be Rebecca herself, all of which inspires emptiness as opposed to relief. Rebecca hits all the emotions of a Gothic novel, and yet at no point does the reader feel overwhelmed enough to abandon the book.

Ironically named after the equally adored and abhorred character in the book, Rebecca anchors itself to the hearts of all those who ride the waves of its plot twists and emotions.

Let us know what you think about Rebecca and Sarina’s great review in the comments! No spoilers on this page, please!

Ready to read Rebecca? Click to buy and help us pay for hosting.