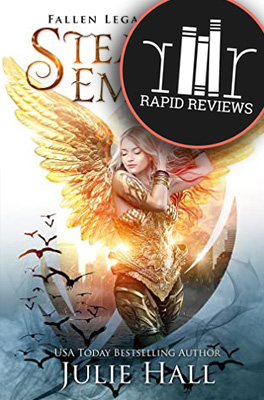 No spoilers in this rapid review of Stealing Embers by Julie Hall.

Stealing Embers is a fun, exciting, swoony, and clean Nephilim paranormal fantasy! Great for all teens!

Emberly is a scrappy, street-smart orphan trying to survive on the streets while battling the strange creatures hunting her in disturbing visions. That is until she’s dragged into an angel-born school called Seraph Academy. Right away, she butts heads with a handsome, broody boy named Steel, and thus their battle of wills begins.

At the Academy, many questions about her past and her visions are answered, but many more are thrown her way.

I loved Emberly’s fish-out-of-water snarky inner monologue. That, along with her struggles, makes her a funny yet endearing character.

Let us know what you think about Stealing Embers in the comments!

A realm of monsters. A world of lies. She belongs to both.

My name is Emberly, and everything I’ve ever been told is a lie.

It takes being dragged to a secret training academy in the mountains to unravel the truth. My captors–an elite race of angel-born warriors called Nephilim.

The deadliest of them all is an arrogant shape shifter, Steel. He’s gorgeous, lethal, hot-headed . . . and convinced I’ll be the death of them all.

Maybe he’s right. As soon as I show up, the monsters that have haunted me my entire life breach the academy walls. My only hope of saving my new friends is learning how to control my powers, but when a stunning betrayal hurts someone I care about, I have an impossible choice.

Stay and fight for a place to belong . . . or decide once and for all that I’m better off alone.

Enter the spectrum world, a realm in-between worlds where shadow beasts draw blood, reality is a maze of twisted lights and sounds, and life goals are whittled down to just one: survive.

Want to read Stealing Embers or the other books in the series? Click to buy and help us pay for hosting!

Oh and share this rapid review of Stealing Embers with your friends!