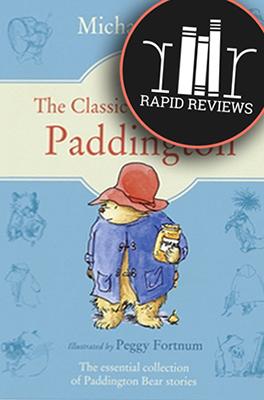 No spoilers in this review of The Classic Adventures of Paddington series by Michael Bond.

I took the train from Paddington National Rail station every day for 3.5 years and went by the metal statue of Paddington bear. I want to say the statue became unnoticeable after a while, but there is nothing about Paddington bear that blends in. To quote the author, “You feel your secrets are safe with a bear. Bears have that kind of effect on people, you can’t ignore them.” And the statue of Paddington leaning to his right makes one want to sit a moment and divulge some secrets to him. Just for this one time, though, Paddington was the one divulging secrets.

Michael Bond first met the bear that would inspire close to 50 stories on Christmas Eve 1956 when he sought refuge from the rain in a store. He was looking for a last minute stocking stuffer for his wife, and he thought the bear was perfect. Once he was home, they decided to name him because “Names are important. Sometimes it is all a person has in their life.” Thus was born Paddington, a heart-warming polite bear who has left his mark on the hearts of millions and on the city of London.

Eleven collections of seven stories each tell us of the various perspiacities, contemplations, and impressions of Paddington. In over 500 pages, he does things we all do and yet makes it all appear so novel. Paddington’s view of the world brings forth the power of simplicity. Normal things gain new lease, like going to the bank, shopping for groceries, travelling on the underground, going on holiday, taking a trip to the seaside, and engaging in the myriad of things we all do.

Consider the time when the bear followed a sign that said “Follow Amber light to Paddington.” It may appear to be common sense to most to distinguish the meaning of signs when one shares their name with a station, but the London Underground can be daunting to the most seasoned traveller. It isn’t such a fanciful thought that a young inexperienced bear may misread a sign and end up going in circles. Paddington’s experiences are the “what-if” version of our lives; they are every parent’s fear and every child’s fantasy. If you hear yourself gasping, shaking your head or squinting to make sure you read it right, just know that you are not alone.

If I consider Paddington by regular societal norms, he should have been in hot water a lot more than he was. Here is a bear that says it like it is, takes everything at face value, and articulates everything others don’t say. The only reason he isn’t often in trouble is because he’s polite. Through Paddington, Bond has demonstrated the power of good manners over asserting your smartness.

You may pause at various points in the stories to consider the unique manner in which Paddington handles his affairs and troubles and wonder why you never thought of doing it that way. Like how Paddington never refuses the opportunistic, mean neighbour Mr. Curry any time he asks him to do something. Despite Mr Curry not even bothering to use his name when speaking with him and calling him bear instead, Paddington is always gracious and responds to his requests to the best of his abilities.

A fantastically distinguishing feature of children’s book writers of this era is they did not talk down to children or protect them from undesirable human emotions such as fear, shame, guilt, and so on. With the help of Paddington, the author impart pearls of wisdom and virtues that children can imbue with ease. Bond describes Paddington as a bear “with a strong sense of right and wrong,” which may well have been for the purpose of highlighting the many virtues he meticulously follows. But as I see it, it also gives the reader the option to decide for themselves whether they want to inculcate those virtues.

Bond also shows the world from the perspective of someone who doesn’t necessarily fit in with the majority. The introduction of the book clearly lays out that the author came up with the idea whilst staring into an empty vastness in his mind, and then the bear on the mantlepiece inspired a sentence that turned into multiple stories.

I wonder if when he started writing the stories he also started thinking of them from the point of view of someone who was new to London and occasionally found himself to be judged based on his appearance. Paddington is not immune to this sort of treatment, but his self-confidence and well-bred manners demonstrate that no matter how someone treats us, we can choose to control our own behaviour. He is a persistent bear who believes that “If you went to the right people and kept on long enough, things had a habit of turning out right in the end.”

The author may have just wanted to tell simple stories about a bear, but I wonder if it ever crossed his mind that Paddington’s simple outlook, enriching experiences, and robust values would ever provoke so much perspective. He may have just wanted to tell the story of an endearing, principled bear, but he also ended up giving generations ahead a role model. There have been other bears like Winnie the Pooh, Baloo, Boo-Boo, and Yogi Bear, but none of them hold the sort of dignified, all-knowing bear persona singularly possessed by Paddington.

Let us know what you think about this review of The Classic Adventures of Paddington and Sarina’s great review in the comments! No spoilers on this page, please!

Ready to read The Classic Adventures of Paddington? Click to buy and help us pay for hosting.