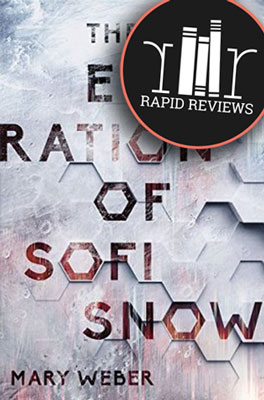 No spoilers in this review of The Evaporation of Sofi Snow by Mary Weber.

If you liked Warcross, you might just like this take on futuristic gaming. Imagine teams of contestants in this competition sitting behind their consoles and programming on-the-spot obstacles for their opponents in a real-life gaming environment. But there’s no avatar performing the gamers’ commands. It’s a flesh and blood person on that semi-virtual battlefield, and for Sofi Snow and her team, this person is her brother Shiloh.

SARA’S BOOK RATING
I give it 4 stars overall.
Lets be friends on Goodreads:

Add that to the fact that all this new tech is only possible because an ice planet arrived and began orbiting the Earth about ten years ago after World War III. The inhabitants, the Delonese, are a secretive but highly advanced people. Though the Earthens love the alien tech, they remain warily distant.

But something strange is happening. Children are disappearing. During one of their competitions, Shiloh is captured and thus begins Sofi’s mysterious adventure.

I really enjoyed this book, and Sofi was a fun character. People aren’t what they seem, situations were flipped on end, and unexpected evidence lurked around every corner.

Let us know what you think about The Evaporation of Sofi Snow in the comments! No spoilers on this page, please!

Ready to read the The Evaporation of Sofi Snow? Click to buy and help us pay for hosting.