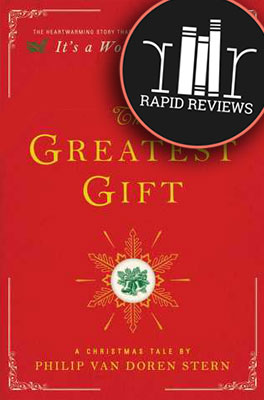 No spoilers in this review of The Greatest Gift by Philip Van Doren Stern.

If you watch the movie It’s a Wonderful Life every Christmas, you can thank Philip Van Doren Stern. Few people are aware the movie is based on his book titled The Greatest Gift, which is just a 24-page story. Take a minute to absorb that a 24-page story made so much impact that every year millions of people turn to it to on the happiest holiday of the year. A 24-page story about the true meaning of life and our place in the universe refreshes our outlook each time we watch it.

There is a certain magic that comes with the book and movie. And if one looks at the story of how this book came about, it truly feels like there was an angel at work. One morning in February 1938, Stern conceived the entire story whilst shaving. As any writer will tell you, and as Stern himself admitted, this is highly unusual. Most stories come to writers as ideas, snippets or simply as inspiration. It’s rare for the entire thing to pop into your mind along with a strong conviction to pursue it.

Before you say it was stroke of good luck, hear me out. Not only did the complete idea occur to him in its entirety, the timing of it all was a matter of inspiration as well. After he wrote the story in 1938, Stern went back to it in 1943 to finish the final edits. He then started sharing it with literary agents and publishers, all of whom thought it was too far into the fantasy genre to publish. Something then inspired him to publish 200 copies of it and send it out to friends and family along with Christmas cards. One of these copies made it to Frank Capra and the rest, as they say, is history!

Not convinced yet? Ok then, imagine writing a story. Now imagine the fear you feel about showing it to your friends and family even after you may have made the final edits. If the thought terrifies you, you are not alone. Most writers will happily pay for an unknown beta reader rather than have someone close to them read their writing. What we write often reflects the depths of our soul, our deepest anguish, our greatest hopes, and our biggest fears. Perhaps Stern was just a confident person. Or maybe his muse had him by the hand and dissipated all his inhibitions. My money is on the latter.

When you read the book, you find that although the focus is on Christmas, the impact and appeal is universal. It can easily be positioned in any other religious, geographical, and celebratory context, and it still works. The Greatest Gift is as relevant in Europe as it is in the Middle East and on either coast of the US. Stern’s daughter, Marguerite Stern Robinson, testifies to this in the afterword when she says her father was of a mixed religious background and believed that no matter their religion, everyone would find this story relatable. In my opinion, this is the distinctive appeal of the book. And it’s so because this is a story of hope and a sense of self.

The problem was not that a Christian man fell into despair; the problem was that a man lost a sense of his place in the world. In his pursuit of holding everything together within his family and community, he began to notice everything he had not been able to achieve. He completely forgot everything he had achieved. How many of us can deny we haven’t been through this ourselves? Watching George Bailey find his sense of self-worth again is overwhelming because we go through it all with him. As he navigates a version of reality in which he does not exist, we begin to think about what the world may be like without us, and we find our place in this perfectly complex web every single time. We are not going through George Bailey’s story; we are going through our own.

Ever since It’s a Wonderful Life released in 1947, the characters have been a part of our lives. George Bailey, Mary Thatcher, Harry Bailey, the angel Clarence, and Mr. Potter have begun to feel as familiar as our own family members. They have become so real that as the 2008 recession hit, an article titled “What Would George Bailey Do?” appeared in The New York Times. This article examined the liquidity crises George Bailey dealt with in the movie and compared it to the financial collapse of the day.

The point here is the movie approached an issue that is as much financial as it is ethical. George Bailey took a human approach to the problem, and Henry Potter took a financial one, and as we saw, he was not the richest man in town financially, but he was the richest in love. At any other time of the year, we would sneer at that sentiment, but as the dark days set in, we put up the Christmas lights, we give thanks for the health and contentment of our family, and we connect with George Bailey’s spirit.

Unlike the behaviors exemplified in those times, people in The Greatest Gift are not perfect. Everyone character is authentic and has shades and layers. For example, in a world where George Bailey did not exist and his brother had died in childhood, you would not expect his parents to be cheerful people. That was the age of resilience and people got on with it no matter what. ut when George turned up and asked questions about their departed son, they struggled to keep their composure.

Similarly, Art Jenkins did not have the strength to absorb what his brother had done to the entire town and took to the bottle without a thought for his wife and children. In many ways like this, the book represents the fragility and strength of the human spirit. People often exist in a dichotomy, if not in a bundle of contradictions, and neither of them are conditions that need to be fixed. In fact, one learns that this story and dare I say, our stories, are heartwarming on account of these contradictions and not in spite of them.

To conclude in the words of Frank Capra:

“Two main ideas were: one, no one is born to be a failure, ad two, no one is poor who has friends.”

Let us know what you think about this review of The Greatest Gift and Sarina’s great review in the comments! No spoilers on this page, please!

Ready to read The Greatest Gift? Click to buy and help us pay for hosting.