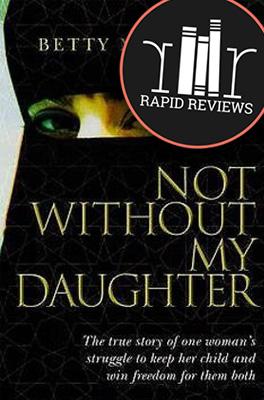 Trigger Warning from Sarina: This recap is true to the books’ themes of violence, racism, Islamophobia, abuse, gaslighting, PTSD, emotional trauma, and kidnapping.

Not Without My Daughter by Betty Mahmoody sold 120 million copies worldwide, and that number grows every day. In 2013, Betty’s husband wrote Lost Without My Daughter, which was closely followed by their daughter’s book, My Name is Mahtob. These three books have unintentionally formed a fascinating trilogy, the same story from three different points of view.

Reading Not Without My Daughter is expected to be a privilege. Iran is not an often-visited land and admittedly enjoys a fearsome reputation. Most of what we know of Iran is through contact with her citizens. If one of those commits a despicable act, should we condemn the entire country?

The sentiment of man versus country is possibly the most difficult question the reader will be left with after reading this trilogy. Iran, the first true global superpower, underwent an unrecognizable transition in the 21st Century, opening it up to all manner of conjecture and commentary.

Betty landed in Iran at the turning point of this transition. The country had just ousted the Shah and gone to war with Iraq. As with any war, nationalist and religious sentiment was at its height. Another sentiment that reigned the mood of the day was hostility towards the United States for supplying arms to both sides. It can be incredibly difficult to separate the two, especially for someone hailing from small towns.

Betty’s life existed far from any seat of power. Until she met Moody, she had scarcely known the freedom of being financially secure (stated in both books). Both these factors came together to make Iran a bigger shock to her than it might have been to someone hailing from a big city or cosmopolitan line of work. The combined effect of her life’s circumstances, trouble within their marriage, and the political climate in Iran came together into a most unsavory mix. Man, state, politics, in-laws, and farsi, all became her “smelly” enemies.

Moody attempted to explain some cultural nuances in his book, which understandably confused Betty. The concepts of tarof (extreme politeness and hospitality) and gholov (boastful exaggeration) can look like deception and lies to the untrained eye. Betty does mention tarof in her book but more to demonstrate how Moody’s family made offers they didn’t mean. It would be easy to explain away her confusion if she didn’t repeatedly use the concept to her own convenience.

Perhaps Moody’s most damning quality in the argument of Man vs Country is that he undermines how difficult a place Iran must have been to adjust to. He testifies to his struggles but blames Betty’s confusion on her inability to understand this complicated culture on her racism. In a similar vein, he paints himself as the innocent party in all domestic disputes. It feels as if everything was being done to him. His side of the story helps describe their troubles better and fills the gaps in Moody’s story, but it is hardly balanced.

Perhaps the most disturbing point Betty makes to this effect is that she married Moody because he “seemed American.” As if his country of birth and his family mean nothing.

Not Without My Daughter does not age well. In fact, in today’s environment, it is blatantly racist and xenophobic. Its case is not helped by the co-author, William Hoffer, having authored another book with a racist bent that deeply offended the Turkish people.

Betty repeatedly calls her in-laws “smelly,” their use of GE appliances wrong, their storage of feta inappropriate, Moody’s family a “collection of relatives,” and their children “unsupervised and dirty.” She disregards the Iranian custom of holding birthday parties on the weekend and insists Moody’s family take the day off work to attend Mahtob’s party on the actual day. Considering the same is observed in western countries, it almost appears Betty considers Iranians jobs unworthy of the same respect afforded to western ones. The worst is possibly her claim of having worn a “Pakistani frock,” which is not a garment that exists. This statement alone could encapsulate her lack of cultural curiosity and respect.

One particular claim sticks out like a sore thumb is Betty affirmed that Iranians shower once a year. But she also said they can’t pray unless they shower after sex. Considering Moody’s family all had children and were extremely religious, one has to assume they weren’t just making babies out of the one shower and sex a year.

Sadly, Moody didn’t appear to be much better. When Betty ran away with their savings, he assumed her impoverished life contributed to that. There doesn’t seem to be many accounts of Moody sitting down with Betty to understand what prompted her behavior. He claims any attempt to speak to Betty ended with her having an epileptic fit. Since these aren’t mentioned in Betty or Mahtob’s books, it is nearly impossible to validate the claim.

My Name is Mahtob is in a league of its own. It exists beyond the glaring stereotypes in Betty’s book but goes on endlessly about everything American. It even manages to find patriotism in a Toblerone bar! And it helps to remember that her book was published in 2015, which, combined with cultural advancements within the States and Mahtob’s travel around the world to promote her mother’s book, should have progressed beyond the stereotypes in Not Without My Daughter. Sadly, nothing of that sort is forthcoming.

The worst stereotype of all within Not Without My Daughter and My Name is Mahtob is they keep calling the U.S. “America,” denying the rest of South and North America their valid claim over the name.

Not Without My Daughter claims they were led over the Zagros mountains into Turkey. Lost Without My Daughter points out the treacherous nature of those mountains. With steep drops and unfriendly climate, only one tribe dares to traverse them, and they only do so twice a year. The Bakhtiari tribe, also called People of the Wind, have been the subject of many articles and documentaries. Bakhtiari migration takes about five weeks, and it’s never during the height of winter as the book claimed. There is no chance she could have made it with a six-year-old and without extensive altitude training.

Not Without My Daughter and My Name is Mahtob both paint a picture of Moody as a stubborn, obsessive monster. By this logic, he should have followed them to the States as soon as they went missing. As both books testify, he never actually showed up. This question is answered in Lost Without My Daughter. Moody relates how Betty pushed her departure until after his green card had expired, and she took his Iranian passport with her, buying herself some time.

My Name is Mahtob details many incidents of her being stalked. Only one of these incidents seems to have been actual contact from her father. In another case, she nearly got a friendly professor into trouble for simply smiling at the students. Mahtob’s paranoia unfortunately puts a number of people at risk and reeks of entitlement.

Hopefully Betty and Mahtob will never know what it means to have your country thrown into turmoil. If they did, they might better understand Moody’s desire to help the injured in Iran. As to whether he lied to take them to Iran or not, none of the books are able to verify that. Moody claims they rented their house before leaving, and Betty claimed they sold the one Moody speaks of and left another house ready for their return.

Despite any cultural stereotyping, misrepresented acts, and blatant criticism of an entire country, the fact is this was an abusive marriage.

Not Without My Daughter details a lot of the physical and mental abuse Betty suffered in Iran. No one should have to go through that, regardless of their position on the host culture. In Lost Without My Daughter, Moody claims he was struck by Betty on many occasions. It doesn’t matter whether one was abusive or both were, striking your partner is not within anyone’s rights.

The trauma of witnessing abuse and the unresolved nature of resentments is obvious in Mahtob’s state of mind and health within My Name is Mahtob. Sadly, children are always the real victims.

As I think about concluding my review, I bump up against the question haunting me through months of reading all three: Would I recommend them? In the writing of this review, I have found that answer. Yes, I would. No book should ever be condemned because it doesn’t fit within the current world or offend your sensibilities. Read all three, do your own research, and form your own opinion.

Let us know what you think about this review of the three books in the Not Without My Daughter trilogy and Sarina’s great review in the comments! No spoilers on this page, please!