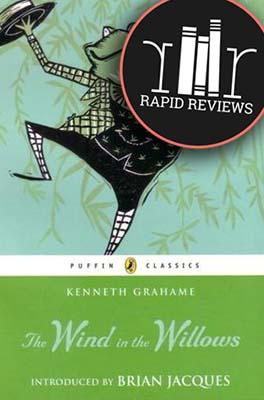 No spoilers in this review of The Wind in the Willows by Kenneth Grahame.

Have you ever looked at a rat or a badger or a hedgehog and wonder what they are up to? That is what Kenneth Grahame thought when he saw them, too, and he made up little stories about these woodland animals that live by the river. These stories turned into the timeless tale of the Water Rat, Mole, Toad, and Badger.

The landscape of the river Thames and the surrounding area is based on Kenneth Grahame’s childhood home in Cookham Dean, where he and his siblings lived with their grandmother. Their house was a stone’s throw away from the Thames and the Quarry Woods in Berkshire, and Kenneth never stopped yearning for it after they moved away. You know that feeling, don’t you? The feeling of remembering every scent, every sound, and every feeling just as it came to you.

Most people remember feelings like this from when we were children as well as from a handful of times in adult life, maybe when they got married, visited retreats, or ate at a high-end restaurant. When we feel an experience is precious, we slow down to savor it. As children, we lived in the moment at all times as we had not yet met fear, expectations, or anxiety. Every experience was keenly lived and deeply felt, which is how The Wind in The Willows will make you feel. It is a sensory experience, a deeply felt understanding that makes us want to linger for just a minute more.

Through the lives of several anthropomorphized animals, four of which are the main characters in the story, Grahame guides us through the fantastic world of animals and their etiquette. Perhaps we have something to learn from their well-crafted etiquette, such as: “It is against animal etiquette to dwell on possible trouble ahead, or even to allude to it.”

A profound statement such as this makes one wonder how deeply the author thought about animals and how they must live their lives. This idea can’t be conjured up whilst spending one casual afternoon on the river bank. Oh no, this is the kind of insight one gets when they spend hours watching animal behavior and human behavior and then comparing the two. Insights like these also make The Wind in the Willows an educational book because through the lives, choices, and etiquettes of animals, Grahame is trying to impart valuable lessons to all his readers, be they children or adults.

Speaking of insight, Kenneth Grahame clearly had much more than he ever got credit for. Several of his observations in the book resonated with me and no doubt with many other readers. Simple things in life such as when he says: “The best part of a holiday is perhaps not so much to be resting yourself, as to see all other fellows busy working.” And also: “Packing the [picnic] basket was not quite such pleasant work as unpacking the basket. It never is but the Mole was bent on enjoying everything.”

These may appear to be simple reflections, but can you imagine taking a moment to notice these profound experiences in our own day-to-day lives? I can assure you I have certainly felt these feelings, but to label and voice them is an entirely different matter. Think about it, the pang of annoyance you feel when you have to re-pack the picnic basket after a day of leisure and joy; it’s never the same feeling as that of unpacking it at the beginning of the day. I am profoundly moved by Grahame’s labelling of these feelings and feel like he has read my mind. I doubt your experience will be very different.

The Wind in The Willows was written in Edwardian Britain, where the shift towards industrialization was quickly marking an end to rural, idyllic existences. Some of that nostalgia has seeped into the book, like when the Water Rat is telling Mole about their surroundings such as the Wild Wood and that beyond the woods lies the Wide World and that Mole should avoid it as much as possible. Then, there is the time Rat meets the Sea Rat, who fills him with wanderlust based on his stories of various cities and continents. Rat nearly takes off on his own journey, but Mole finds him in time and stops him.

Today, we might view this decision with much doubt and even contempt as travelling the world is seen as a virtue, but perhaps Grahame viewed himself and his contemporaries as the last sentries to a world that was fast disappearing. Silences were being replaced with the buzz and hum of factories, and woods were being felled to accommodate the large migration from rural to urban areas. Resisting what was fast approaching was their way of holding onto their countryside life for just a little while longer. Somewhere, we all do that and say that we are doing it for old time’s sake, for nostalgia, and for holding onto a moment longer, don’t we?

There are those who believe the book harbors a contempt for women, from either their absence or from a deeply unidimensional view of them, whether it is the gaoler’s daughter who is singularly sweet or the barge woman who is only crafty. There may be some truth in this observation, but at the risk of offending expert opinions, I believe that is a lazy way of trying to find sub-text in pure storytelling. Every story reflects the author’s personal opinions, so yes, if Kenneth Grahame did not enjoy a harmonious relationship with his wife, he may have been inspired by some of her behavior. But does this imply his disdain for the entire female gender? I wouldn’t go that far.

In an article put forth by The Daily Mail, there is speculation the relationship between the Rat and Mole was of a homosexual nature. I read the evidence suggested, and I would venture to call this a lazy assessment as well. I do not think that two male-gendered individuals, be they animal or human, cannot ever share a tender moment and if they do, they must be gay. I also take objection to the theory that emotions and sensitivity are only displayed by males in a romantic relationship. This is precisely the sort of thinking we should all take objection to, in the interest of giving people the freedom to express themselves as they see fit. Emotions and expressions are not indicative of sexuality, and they should never be appropriated as such.

Now, there is the matter at the core of this debate. Were Rat and Mole romantically involved? Well, I say it is up to the reader which version of their relationship they want to buy into. I personally did not think anything of their tenderness and did not find a need to label it, but if someone feels comforted in the thought that this book is hiding representation, then by all means, keep with your version. Every book is perceived by every reader in a different manner, and every version is acceptable at an individual level. No one should feel forced to buy into another’s version.

The Wind in The Willows is a feeling. It is the written word, yes, but more than that, it is a feeling. I don’t think the author intended it to become a snapshot of rural Britain for all those wishing to travel back in time or disconnect from their lives or even for expats living abroad to reach for at any moment. The Wind in The Willows is Britain in your pocket, it is the very essence of British life and values. Much like British people, the characters in the book are strong, resilient, and flawed. They are each unique and equally accepting of both the virtues and absurdities of their friends. That value of individuality exists even today, and it is a beautiful thing to be transported to that life again by way of the book.

Whatever you think of The Wind in The Willows, it is undeniably an amazing read that will leave you wiser and happier. It is a delight to both adults and children aike. It is pure escapism without the adrenaline rush of Alice in Wonderland. It is a purer escapist fantasy that leaves us with some fantastic lessons to live by, such as this nugget by Mole:

“Nothing can happen to you, and nothing can get at you. You’re entirely your own master, and you don’t have to consult anybody or mind what they say.”

Let us know what you think about this review of The Wind in the Willows and Sarina’s great review in the comments! No spoilers on this page, please!

Ready to read The Wind in the Willows? Click to buy and help us pay for hosting.