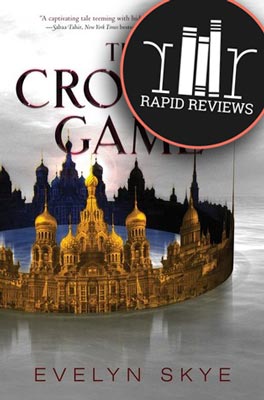 No spoilers in this review of The Crown’s Game by Evelyn Skye! I give it 3.75 stars. I liked it, but not as much as I was expecting given the hype I read before starting it. I tried not to get too excited as I heard comparisons to The Night Circus, which is one of my absolute favorite books. While The Crown’s Game was a fun read, it didn’t quite compare.

The story is set in St. Petersburg, Russia, in 1825. In this fictional version of Russian history, the tsar wants an Imperial Enchanter by his side as he rules.

STACY’S BOOK RATING
I give it 3.75 stars overall.
Lets be friends on Goodreads:

There is usually one enchanter born each generation, but occasionally there are two. If two exist, they divide the magical power store in Russia, thus diminishing the power of either individual. In this case, the tsar orders a magical battle, The Crown’s Game, to take place.

The enchanters can perform any type of enchantment, limited only by their imaginations, in alternating turns. The tsar can declare a winner at any time, and the rules say the loser must die so the new Imperial Enchanter can have access to all magical power in Russia. This generation has two enchanters, Vika and Nikolai, and their game commences near the beginning of the book.

It was (sorry in advance for the pun) magical to read about Imperial Russia. I didn’t realize Skye’s extensive background in and research of this realm until I read her note at the end of the book. Her degree is in Russian history! And the tsar and tsarina in this book are real historical figures, although Skye took many liberties with their story.

I enjoyed reading about the friendship between Nikolai and Pasha, the tsar’s son. I liked Vika’s vibrancy and boldness. The enchantments Vika and Nikolai perform, especially the later ones, are intriguing and original. But overall, the book just didn’t pull me in and overwhelm me quite as much as I was hoping. It is a good book, though, and definitely worth a read if you enjoy stories involving magic! The book ended on a very interesting note for each of the main characters, and I am excited to read book 2!

Let us know what you think about The Crown’s Game in the comments! No spoilers on this page please. 🙂