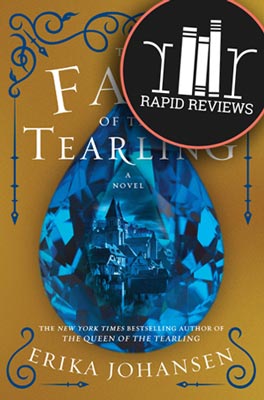 No spoilers in this review of The Fate of the Tearling by Erika Johansen. I give it 4.5 stars! I read several bloggers who didn’t enjoy the ending of this book. While I can see where they’re coming from, I thought it was fantastic. Was it surprising? Yes. Were parts of it bittersweet? Yes. Will I contemplate it for a long time? Yes. That is basically the exact formula for a series-ender I will love. I wish I could tweak one small detail about the very end, and then it would be close to perfect for me. If you want to know what that detail is, ask me in the comments and I’ll be spoilery there. 😉

The book opens with the Fetch, who has always seemed important to the overall storyline but was largely absent from book 2. It then picks up right where book 2 left off, with Kelsea held captive by the Red Queen after sacrificing herself in exchange for three years of peace for the Tearling. The Mace, the Fetch, and their men are at the Keep working on a plan to rescue Kelsea. While Kelsea is held prisoner, she is contemplating her long-term goal: how to restore the embattled Tearling kingdom to its former glory. Past and present mingle once again as Kelsea tries to figure out how to accomplish this.

Just when I think Johansen has too many characters to properly juggle, she introduces several more. The most noteworthy is Katie, another leading lady whose story is intertwined with Tear history. And Johansen doesn’t disappoint: She has created so many characters I care about, new and old alike. I feel deeply invested in each of their narratives almost immediately upon introduction, even with the seemingly minor characters. They are each important as she weaves the tapestry that is the Tearling story. I rooted for so many of them to get their moment of honor and redemption!

I think the time Johansen has taken to unravel the complicated story of the Tearling made it that much more satisfying in the end. In the acknowledgements, she thanks the readers for their patience in letting the Tearling be “a gradually unfolding world, full of lost and often confounding history.” I adored how the past and present were both needed to tell the full story.

My only complaints are the one small thing I wish I could change about the very end of the book as well as some fundamental differences I apparently have with Johansen as far as views on society. It took me until the final installment, but I discovered I don’t agree with her views on religion or government/politics. I choose to overlook these differences, however, in favor of her incredible story.

If you have read the first two Tearling books, book 3 is a must-read to see how the story ends. If you haven’t started this series, I highly recommend it! One caveat: This is an adult book. The main protagonist is nineteen, but the language and adult situations definitely push it out of the YA realm. This is not meant for young readers.

One final note pertaining to the future of the Tearling world: From a Mugglenet interview I found, it looks like this isn’t the last we’ll hear about the Tear kingdom. Johansen says there are several characters who have more story to tell. With the way this book ended, I can’t imagine who they might be. I will look forward to anything else Johansen gifts us with! I also eagerly await movie news, as Johansen confirms there is a script in the aforementioned Mugglenet interview.

Let us know what you think about The Fate of the Tearling in the comments! No spoilers on this page please. 🙂

Ready to read The Fate of the Tearling? Click to buy and help us pay for hosting.

10 thoughts on “Rapid Review of The Fate of the Tearling”

Searching for a gift for that book lover in your life? Or maybe you’re looking for some bookish gifts to add to your own Christmas wish list. Check out this fun post! #christmaslist #booklovers #bookishgifts https://www.bookseriesrecaps.com/gifts-for-book-lovers/?doing_wp_cron=1606234293.0905160903930664062500