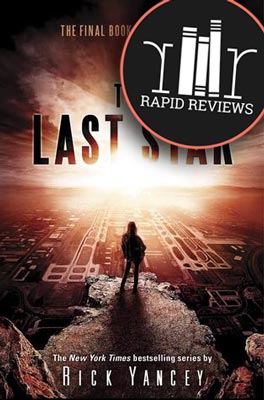 No spoilers in this review of The Last Star by Rick Yancey! I liked it! I give it 3.25 stars. Was it a brilliant book filled with heady prose? No. Were there huge shocks I never saw coming? No. But it was a fun read and a fitting conclusion to this series.

Cassie and company have been through so much. They have lost their families and many of their friends. They have been injured and had disagreements but have never lost hope they might somehow defeat the alien invaders. Or they at least still have the youthful bravado to try this seemingly impossible task. In some ways they have changed tremendously, yet in some ways they are the same…Cassie remains snarky, Evan remains protective, Ben remains courageous, and Ringer remains lethal.

STACY’S BOOK RATING
I give it 3.25 stars overall.
Lets be friends on Goodreads:

Most of the group has been holed up at Grace’s house. If the intel they’ve gathered is accurate, the aliens will soon descend to Earth in a pod. And they are preparing to fight the invaders if this occurs. There are various challenges and obstacles in their way, but the entire book is pointed toward the group’s inevitable showdown with Vosch and the aliens who have been hovering above earth for the span of three books.

In the current YA environment, which seems to be trending toward a more mature feel, this book seemed absolutely aimed at teenagers. The dialog felt like the way true American teenagers might speak in these situations. Besides the sporadic foul language, it felt like a good book for the younger side of the YA crowd.

If you enjoyed the first two books, then it is worth your time to finish out this series! I enjoyed the climax and the aftermath…the way the few who remain will continue with life in the wake of the 7 billion deaths described in the first two books. Yancey wrapped things up well but left it open ended enough where my mind will occasionally ponder what the survivors might be doing and how they will try to restore civilization to its former grandeur.

Let us know what you think about The Last Star in the comments! No spoilers on this page please. 🙂

I love love love A Christmas Carol. What are some

February 16, 2021
A Court of Silver Flames (A Court of Thorns and Roses #4) Read a full recap of the other books in this series (spoilers!).