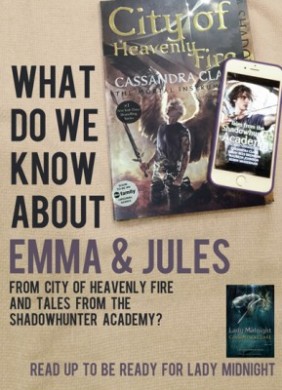 We met Emma and Jules in City of Heavenly Fire and learned a little more about the pair in the Tales from the Shadowhunter Academy novellas. This new series focuses on the two of them as well as Jules’ family. It takes place in L.A. five years after City of Heavenly Fire. Emma has been helping Jules raise his brothers and sisters. They have worked together in every way, and they recently became parabatai. If Cassandra Clare’s past series are any indication, the new Dark Artifices trilogy will be full of adventure, mystery, good versus evil, and young love. Read below for the details we have learned about Emma and the Blackthorns in our brief glimpses so far.

Read the official description of Lady Midnight and add this book at Goodreads.

The Dark Artifices Series
Read a little about the books in this series at Goodreads.

Her parents were recently murdered, and it’s a mystery as to who did it.

She’s an excellent fighter and her weapon of choice is a family heirloom, a sword called Cortana.

Her best friend is Julian, whom she has grown up with. They have learned everything about life and about being a Shadowhunter together.

She is more brave and rash, and Jules often takes the blame for their/her mistakes.

She is determined to investigate her parents’ death and take revenge on the killer(s).

His mother died when Tavvy was born.

He has to raise his younger brothers and sisters after his father, Helen, and Mark are taken from them.

He eventually is forced to kill his own father when he attacks them near the end of the book after being converted to one of Sebastian’s dark ones.

Their Uncle Arthur takes them all in when he eventually comes to run the LA Institute, but the kids already rely mostly on Jules.

He loves his siblings so much, but the stress of all of this at a young age has aged him.

He is afraid Emma will be separated from him since both of their parents are gone, so he suggests they become parabtai to guarantee they’ll be together forever.

Helen – She is from a different mom (a member of the Seelie royal court) and has downworlder blood. She is eventually exiled to Wrangel Island (because of the accident of her birth), leaving Jules as the oldest Blackthorn sibling of those left together.

Mark – He is from a different mom (a member of the Seelie royal court) and has downworlder blood. He is captured by Sebastian but deemed not fit for the dark crew because of his Faerie blood. So he is sent to the Wild Hunt. This group comes to gather the dead after battles, and the dead serve them.

Livia (Livvy) – She is Ty’s twin. She watches over Ty and protects him.

Tiberius (Ty) – He’s Livvy’s twin. He is autistic. He is the only Blackthorn child with black hair, and it is mentioned that everyone wonders why. [I think this might eventually be a very important piece of information because of the way it’s mentioned.]

What do we discover about the main characters in Tales from the Shadowhunter Academy?

Emma and the Blackthorns aren’t mentioned in every novella in the Tales from the Shadowhunter Academy series, but they are mentioned in the following three:

Helen is commanded to talk to the students at the Shadowhunter Academy about her father’s story. She tells them this:

For seven years, her (and Mark’s) father Andrew was bound to the Seelie queen Nerissa by Faerie magic. He was loved the whole time, but it was a lie. Simultaneously, their Uncle Arthur was held there tortured. Both men finally escaped.

Helen says their father and his wife raised her and Mark as their own. She tells the students her parents probably deep down never trusted them, though, because Shadowhunters believe you should never trust a Faerie, even anyone with Faerie blood. [I can’t tell for sure whether she truly believes this or is being forced to say it by the Clave.]

After chasing a Faerie with his friend George, Simon ends up in Faerieland. A Faerie asks to speak to Simon alone, and he soon discovers it is Mark Blackthorn. Mark is excited and thinks the Shadowhunters have finally come to take him home. He still remembers his family, despite the Faerie’s attempts to erase them from his memory. Simon tells him he didn’t mean to come to Faerieland and he’s not here for a rescue mission. Mark asks when they will come for him then. And he wants to know how much time has passed since he’s been gone.

Simon tells him the Clave has decided they won’t bring Mark home to the Shadowhunters. Mark then asks about his family. Simon tells him about Helen alone because this is the only information he has since his memories were erased. Simon can tell that while Mark has tried to remain a Shadowhunter, living in the Faerie World has changed him more than he knows. The way he moves and the way he talks is different. Isabelle arrives and tells Mark to come home with them. She says she will bear the price of this deed, whatever it may be. Mark says the Wild Hunt would look for him and kill his family for leaving them. He lets Simon and Isabelle escape and head back to their world.

It is time for the fiery trial, the ceremony which will join Jules and Emma as parabatai for life. They have asked Simon and Clary to be their witnesses. When they meet together before the ceremony, Simon notices that Jules doesn’t seem quite like he expected him to be on a day like this. He seems reserved and something else, too. Simon tries to make awkward small talk, but Jules lights up when Clary asks the right question…how everyone in his family is doing. He talks about all of his siblings and their current interests.

As the time for the ceremony is upon them, Simon observes that both Jules and Emma seem to feel just a little different than what he expected. It is more than just nerves, but he can’t put his finger on it for sure. The ceremony is performed by a group Silent Brothers in an ornate room filled with marble. They stand inside a circle of fire. Simon sees one more little sign as Emma and Jules move to the middle ring of fire for the conclusion of the ceremony. It’s a look he recognizes but can’t quite remember or name.

Then all of the sudden it hits Simon. Even though his memories have been erased, this one finally comes back to him. He thinks about something Jace mentioned to him earlier in the book, when he and Clary were in a dream-like state. It was a test Jem and some others put them through to see if the two of them are fit to be parabatai. And in the dream Jace asks him to remember the first time Simon met him. It was the moment in a coffee shop so long ago when Simon was ready to tell Clary about his feelings for her. That’s when she first saw Jace. Simon couldn’t see him at the time because he was a mundane, but that was his first encounter with Jace. And he knows now why this is important. [The book never comes out and says it, but I believe the look on Simon’s face so long ago is mirrored in the look on Jules’ face during the ceremony.]

After the ceremony, they go to a big reception with all of their family and friends. It is noted once again that while Emma and Jules are huddled together in the corner of the room that there still seems to be an awkward space between them. Julian has to leave to get a little air, and Emma takes over caring for his siblings while he’s gone as Ty runs away with a whole cheese wheel. This once again shows Jules’ discomfort, how linked their lives are, and how they look out for one another.

There you go! That’s what we know so far about Emma and Jules and the Dark Artifices supporting cast. Lady Midnight, the first book in this series, will be released on March 8, 2016!

Did we leave anything out? If so let us know what you found about Emma and Jules!

Additional resources for your reading pleasure:

For another take on what we know about the Dark Artifices crew so far, click here for a compilation of tweets the author has shared about the characters!

Click here for a collection of the Lady Midnight snippets the author has shared so far!

Click here for details on the past, present, and future Shadowhunter novels and novellas!


Follow Book Series Recaps on Instagram and Twitter.
Friend us on Goodreads: Sara and Stacy.
Check out awesome Shadowhunter art, quotes and more on Pinterest. We have a Shadowhunters board and a Dark Artifices board.

6 thoughts on “What do I need to know before reading Lady Midnight?”