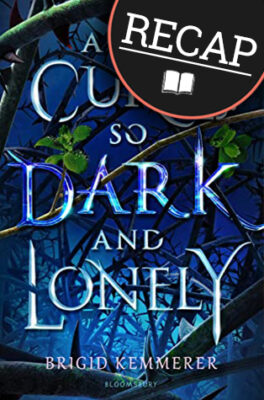 Read a full summary of A Curse So Dark and Lonely, book #1 in Brigid Kemmerer’s Cursebreakers series. This page is full of spoilers, so beware. If you are wondering what happened in A Curse so Dark and Lonely, then you are in the right place!

Ratings
4.6 stars on Amazon
4.15 stars on Goodreads
Add A Curse so Dark and Lonely at Goodreads.

What happened in A Curse so Dark and Lonely?

Cursed by a powerful enchantress to repeat the autumn of his eighteenth year, Prince Rhen, the heir of Emberfall, thought he could be saved easily if a girl fell for him. But that was before he turned into a vicious beast hell-bent on destruction. Before he destroyed his castle, his family, and every last shred of hope.

Nothing has ever been easy for Harper. With her father long gone, her mother dying, and her brother constantly underestimating her because of her cerebral palsy, Harper learned to be tough enough to survive. When she tries to save a stranger on the streets of Washington, DC, she’s pulled into a magical world.

Harper lives in Washington DC, where she plays lookout for her brother, Jake. On one of her “stakeouts” she sees Grey, Commander of Rhen’s army, as he attempts to abduct another woman. Harper steps in to stop him, but Grey takes her instead. He transports her to Emberfall (Rhen’s kingdom in another world). But Grey and Rhen quickly find that Harper is not as trusting as the many girls before her.

Lady Lilith, an enchantress, arrives and torments Grey and Prince Rhen. The curse was her doing. She decides that this will be Rhen’s last season. If Harper doesn’t fall in love with him, he will become a beast forever.

Rhen asks Grey to promise to kill him when, later in the season, he begins to change into the beast. Grey wants to refuse but doesn’t flat out say not to a direct order from the prince.

On Harper’s first day, they resort to locking her in her room after a failed escape attempt. She climbs out the two-story window and takes off on horseback.

She finally comes across a farmhouse, but it is burning to the ground, and the occupant—a woman and her small children—are being held at sword point. The assailants say they are taking the house and land for the crown, and they agree to kill the children and take the woman. Harper runs her horse into the swordsman and eventually kills him. Rhen and Grey show up and take care of the other men.

Rhen puts the woman up in an inn where they learn that the people believe that the royals are either hiding or dead. They are angry that the king does not protect them from the monster. Rhen later admits to Harper that his father—and all his family—are dead at the monster’s hand. He has carried out orders to close the borders in his father’s name. The people have suffered for it.

Harper doesn’t know how to answer the innkeeper’s questions. She accidentally leads them to believe that she is a princess from another kingdom and that she and Rhen are to be married. Harper also learns that Grey has kidnapped hundreds of girls before her and that they are meant to break the curse on the kingdom, but Grey can’t say what Harper is meant to do. The girls spend one season (three months) here, and when the curse is not broken, they return home.

Lilith is making Rhen pay because Rhen’s grandfather killed her people, the other sorceresses. She is the only one left and has absorbed their power, making her very strong.

Back at the castle, Harper comes across a room coated in blood and guts, and Rhen admits that it is his blood and that often he dies before each season ends. He always comes back to life. Until now. If he dies this time, he will truly be dead.

Harper sees all of the food in the castle and decides to take some back to the inn. The people begin to put their hope in Harper.

While she Rhen and Grey are at the inn, another group shows up and demands that the innkeeper hand the building over in the crown’s name. They are working for Karis Luran, the Queen of Syhl Shallow. Harper tricks them into thinking that her kingdom in Disi (Washington DC) will send troops to squash out their plans. She, Rhen, and Grey stay the night to protect those in the inn.

Grey teaches Harper to throw knives, and Rhen is a bit jealous. Rhen asks Grey to put together a royal guard that at least “looks like” they know what they are doing.

Harper asks for Rhen to set up a meeting with Lilith because she wants to ask for passage home. Lilith denies the request after Harper throws a knife at her. Harper is livid that Lilith hurts Rhen. Lilith scars Harper’s face, and Harper finally understands who they are up against.

The group travels to a nearby town to give the people confidence that the crown is with them. They are attacked, but everything turns out well, and many swear loyalty to Rhen.

Rhen and Harper almost kiss, but Harper doesn’t yet know if she can decipher what is real and what is a show from Rhen.

Many people arrive at the castle and want to help. Grey fills out the royal guard, including a girl named Zo, who becomes friends with Harper.

Harper learns that Lilith comes to torture Rhen every night by showing him images of the people he has killed while in the beast form. Harper invites Rhen to stay in her room every night because Lilith has promised not to interfere with Harper. It works.

Harper receives more fighting lessons from others in the castle.

Lilith shows Harper that her mother is dying, and Lilith gives Grey the ability to travel to Harper’s world whenever he likes. Harper wants to leave, but Grey doesn’t want to take her. This is their last chance to save their kingdom. Rhen agrees to let her go and orders Grey to take her.

Rhen is growing scales and knows that the beast is near.

Grey takes Harper along with some jewels to get her family out of financial trouble. Harper tells him to come back the next day.

Harper’s mother dies, and Harper spends some time with her brother. Grey doesn’t return for her for days.

Karis Luran tells Rhen that she knows that his father is dead and that their army and alliance are a sham. She also says that Rhen’s father had another child with an enchantress. This child is the true heir to the throne.

Rhen tells Grey to get the people out of the castle as he feels himself changing into the beast. He tries to jump from the balcony to kill himself, but he is too late because this time, his beast can fly.

After days with no word from Grey, he finally arrives at Harper’s apartment covered in blood. Harper was in the middle of dinner with her brother, Jake, and his boyfriend, Noah. Noah, a doctor, stitches him up. At that moment, the men who Harper’s father owed money to arrive, and to escape, Grey transports himself, Harper, Noah, and Jake back to Emberfall.

Harper tells everyone that Jake is the crown prince of Disi, and Noah is a healer.

How did A Curse so Dark and Lonely end?

As Grey and Harper are attempting to lead Rhen (in beast form) away from the castle, Rhen attacks but seems to recognize Harper. He grabs her and flies away. She finally gets through to him a bit, and he brings her to the ground. The soldiers think she’s tamed the beast.

Harper gets Rhen to attack Karis’s army, and they flee. Harper is injured in the process and passes out.

She wakes in the infirmary, and Lilith visits again. To protect Harper, Grey offers to serve Lilith and make an oath to her. She accepts, but he never really said the words. Lilith takes Grey’s sword and tries to kill Rhen, but Harper jumps in front of him and takes the blade instead.

Grey stabs Lilith and portals her to Harper’s world. She asks if he wants to know who he really is and what blood runs in his veins. He says no and thinks he finally killed Lilith outside of Emberfall, but he portals back without her before he finds out for sure.

The curse is broken, and Rhen isn’t sure if it’s because Harper is in love with him or if Grey killed Lilith.

Harper wakes up after six days and finds that Rhen is back to his usual form. Grey has not reappeared, leaving Harper, Jake, and Noah trapped in Emberfall.

Epilogue: Grey is back in his homeworld but hides at his mother’s house as he heals. His mother admits that the late king brought Grey to her as a baby. Grey is likely the heir to the throne, and his mother was an enchantress.

As we leave the story, we do not know if Lilith is dead or alive. If she is dead, Grey may have absorbed her considerable power (as hinted early on in the book). We also don’t know for sure if Harper is truly in love with Rhen or if she harbors some feelings for Grey.

Ready to read or reread A Curse so Dark and Lonely? Click to buy and help us pay for hosting! (affiliate link)