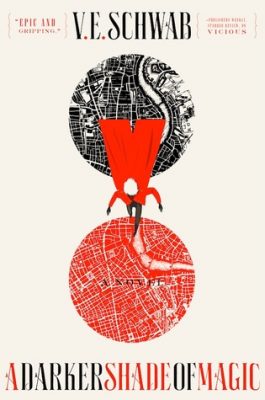 Ratings
4.4 stars on Amazon
4.04 stars on Goodreads
Add A Darker Shade of Magic at Goodreads

What happened in A Darker Shade of Magic

Kell has been traveling between the worlds of London since he was a boy. There are four Londons: Gray London (non-magical), Red London (rich with magic), White London (sick with magic) and Black London (already fallen to black magic). Kell lives in Red London and only Black London is closed to him. Kell has the mark of a blood magician: one blue eye and one completely black eye and this makes him an Antari. There are only two known to exist. Antari can make doors of magic that only they can pass through (while holding a relic from the destination London).  They are the only ones that can travel between the Londons.

Kell often visits a particular tavern, which is the one place that is always present in all of the London’s, though it has a different name in each. He is famous even in Gray London, where the tavern is called the Stones Throw. The owner there is called Barron and people come to see Kell, the magician, and trade other-London artifacts with him.

Rhy is Kell’s “brother” and a Prince of Red London. Kell is adopted into the royal family. Kell doesn’t remember much of his childhood or where he came from. He was brought to the palace when he was young and when he was twelve he first noticed the memory rune on his arm. He suspects his adopted parents put it there.

Holland, the other Antari, and property of the twin rulers of White London, gives Rhy a pendant as a birthday gift and says it is for strength. Rhy is about to have a birthday party to celebrate his 20th year.

Lila Bard, wanted thief and pickpocket, lives in Gray London. She dreams of being a pirate and possesses a beloved map that she thinks of as the map to anywhere. Due to a fire, she is forced to go back to Barron at the tavern.

White London is in decay being so near to Black London. Red London is partially responsible because they sealed themselves off so long ago after Black’s fall.

Kell takes a letter to Astrid one of White London’s rulers.  Kell is asked to join them for a drink and he has a bit too much. Later he stumbles to the tavern and a strange woman convinces him to take a letter and payment with him back to Red London.

Kell goes to deliver the letter in Red London but someone is waiting for him. He has been set up. He runs but the payment he was given contained a magic stone and a tracking rune. He is chased until cornered. The person perusing him is being manipulated and carries a sword of the royal guard. The stone gives Kell extra strength to stop time when fighting the man.  The stone is rough on one side and smooth on the other as if it has been broken. The magic that Kell and the stone used to defeat the hired cut-throat creates a shell around him which later breaks apart and is absorbed into his body. His eyes turn pitch black.

Kell gets away from other pursuers by retreating to Gray London. There is an engraving on the smooth side of the stone that says “Vitara” which is the word for magic in the magic language. He runs into Lila and she robs him of the stone so he follows her to her rooms at the Stone’s Throw tavern.  He tells her that it is magic and she is able to use the stone to create a sword.  Kell is realizing just how powerful it is.

Kell leaves and Lila throws the black sword out the window. Later another man finds it and keeps it. The sword makes him stab himself and then dissolves into his body through the wound. When he wakes up he has two black eyes and black veins run under his skin.

Holland tracks Lila down and forces her to call out for Kell. To her surprise, Kell comes to her rescue. Lila runs away and Kell and Holland battle it out. Kell becomes chained with magic but Lila (feeling guilty) returns, disarms Holland, and helps the injured Kell get away. She brings him back to the Stone’s Throw where Barron helps her tend to him.  Later Holland kills Barron as he searches for Kell and Lila.

Kell agrees to allow Lila to come with him on his self appointed mission to take the black stone back to Black London where it belongs. Using the magic of the stone for Lila, they are able to successfully travel to Red London together.

Kell and Lila visit a shopkeeper named Fletcher to find a White London trinket, a white rook, that will allow them to travel on. Unfortunately Fletcher alerts the royal guard. Lila is able to conceal herself using the stone and she hangs back while Kell goes with the guard back to the palace. After they leave, Lila sees one of the guards slit Fletcher’s neck before leaving.

At the palace during Rhy’s birthday party, Astrid has taken over Rhy’s body with magic and Kell is the only one that knows. Astrid wants to completely open the doors between worlds and she wants her and her brother, Athos to rule. She also reveals that there is another half to the stone. Lila shows up to help and Astrid realizes that she has the stone. Astrid stabs Rhy and is able to take over another person’s body. Anyone that holds her pendant (Rhy’s gift from Holland) is taken over. Kell and Lila attempt to escape with the unconscious but healing Rhy.

They pass through a secret door that takes them to one of Kell’s childhood sanctuaries. Rhy dies but Kell uses the stone to bring Rhy back and bind his body to his own. They both now have a mark branded on their chests. The stone attaches itself to Kell. While here, the priest asks Lila about her glass eye. Most people don’t notice. She says she doesn’t remember. She was told she lost it as a baby.

They plan to travel together to White London but Kell is stopped by Holland and remains in Red London and Lila ends up in White London by herself. She feels threatened by some men and shoots one of them.

Holland tries to take the stone from Kell but Kell ends up stabbing him. Kell thinks he allowed him to do it. Holland looked relieved to be meeting death. Afterwards Kell won’t leave his body and takes him to White London where he finds Lila cutting her way through several men.

How did A Darker Shade of Magic end?

Lila wishes to find Astrid’s body and kill her while her mind is still in Red London.  When Lila reaches the throne room she has to break a protective ward but when she finally does Astrid wakes up.  Lila is subdued by Astrid and Astrid transforms her body to look like Lila. Astrid as Lila goes downstairs and tries to trick Kell into giving her the stone. He sees through the disguise and kills her instead. The dark magic has formed threads around Kell’s entire body.

Just as Kell is about the leave and go to Black London, the dark magic inside him takes shape and form in Kell’s mind. It’s name is Vitari which means pure magic. It tries to crush him from within to take over his body. Finally, Kell is able to speak the words that dispel the magic. As this happens, all of the black magic that has spread person to person in Red London is gone leaving many bodies in its wake.

Kell finds that Holland is not dead after all but is not yet conscious.  He creates a door and sends Holland and the stone to Black London.

Lila and Kell travel back to Red London where they are quickly picked up by the Royal guard and are presented to the king and queen. They tell them everything except where Lila is really from and they bring Prince Rhy back home.

Later, Rhy seems to be healing and the people continue to be wary of Kell. Kell offers to take Lila home to Gray London but she refuses.  She says goodbye to both of them and sets off on a glossy black ship that will take her on her adventures.

Ready to read A Conjuring of Light?  Click to buy and help us pay for hosting! 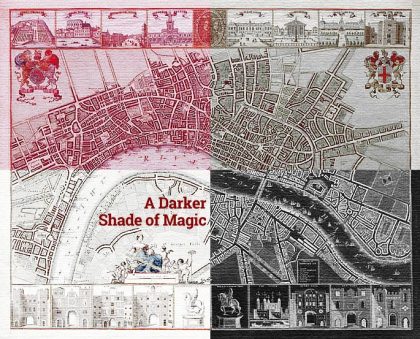 8 thoughts on “What happened in A Darker Shade of Magic? (Shades of Magic #1)”