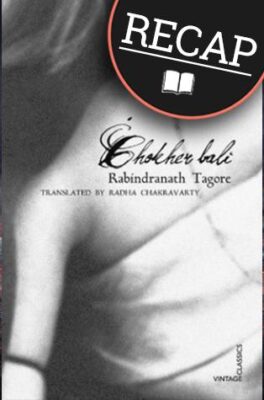 Read part one of a full summary of Chokher Bali by Rabindranath Tagore right here! This page is full of spoilers, so beware. If you are wondering what happened in Chokher Bali, then you are in the right place!

What happened in Chokher Bali?

The book is expected to reflect the society of 19th Century India, when the plight of widows was still pitiful. They existed on the fringes of society and were disallowed from enjoying any of the regular comforts of life like sleeping on a bed, eating delicious food, wearing colourful clothes, or even having hair. To think that this kind of life would incite a certain amount of bitterness in them would be entirely accurate.

The story opens to a wealthy family where the matriarch Rajlakshmi was widowed as was her subdued, childless sister-in-law Annapurna. Both doted on Rajlakshmi’s son Mahendra and his best friend Bihari, who as good as lived with them. Rajlakshmi presented the prospect of her son marrying the beautiful and well-educated Binodini, but Mahendra refused at the last minute. In a panic and in the habit of offering everything refused by Mahendra to Bihari, Rajlakshmi asked Bihari if he would marry Binodini. Bihari was mildly offended and asked her to leave him single and happy.

Binodini was married off to a distant cousin of Mahendra’s to honour a wedding for which all preparations had been made. She was widowed shortly after the wedding, leaving her to the arid life of a widow in those days. Mahendra ended up marrying Ashalatha, to whom his aunt Annapurna had proposed for Bihari. This turn of events saw Bihari turned off from marriage for good as he had developed a fancy for Ashalatha when he went to see her.

Ashalatha was a simple girl devoid in the arts of household management and handling more than one relationship at once. She devoted herself to being Mahendra’s loving companion, thus falling out of favour with his mother, who continuously shamed her and her aunt, Annapurna.

Rajlakshmi was side-lined by her son Mahendra and decided to teach him a lesson by going away to her ancestral village, which also happened to be where Binodini lived. Binodini took excellent care of Rajlakshmi and won her heart so much so that Rajlakshmi decided to bring her back to Calcutta with her when she returned. Binodini had an ulterior motive to come to Calcutta. She had read Mahendra’s letters to Bihari, and she was intrigued by these two love birds who appeared to have renounced the world.

In the meantime, Annapurna had retired to Kashi, a holy spot where the elderly moved to spend their days praying and meditating on the banks of the Ganges. They often remained there until their passing, having made suitable arrangements and payments for their cremation with the local priests.

When their forbidden love was discovered, Mahendra left home with Binodini, deserting his doting mother and wife. Bihari had left town after his last altercation with Mahendra when he’d accused him of being in love with Ashalatha. Unbeknownst to Mahendra, when Binodini suggested they travel around the country, she was taking him where she’d found out that Bihari had been.

They were reunited in Allahabad, where Bihari—who’d learnt of the sad state of Mahendra’s family life—had come to fetch him as his mother was gravely ill. Annapurna had also returned to Calcutta to help Ashalatha look after Rajlakshmi. Rajlakshmi’s illness made the awkward reunion much more bearable than it would have been under normal circumstances.

After being shunned by Binodini on their travels, Mahendra found renewed appreciation for Ashalatha, especially as she had grown more confident and graceful after what she had been through. Rajlakshmi also recognised her hand in pushing Mahendra towards Binodini in an effort to eschew Asha. Bihari realised that Binodini had as much love in her heart for him as he had for her and offered to marry her. But widows being re-married was unheard of in the day. So Binodini decided not to bring shame on anyone else and left for Kashi with Annapurna after Rajlakshmi’s death.

The curtain closed on a household having found renewed love and friendship on much more solid footing.

There you go! That’s what happened in Chokher Bali. We hope you enjoyed this Chokher Bali summary with spoilers.

Ready to read Chokher Bali? Click to buy and help us pay for hosting!