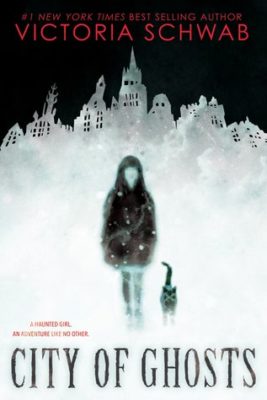 Read a full summary of City of Ghosts, book #1 of Victoria Schwab’s Cassidy Blake series, right here!  This page is full of spoilers so beware.  If you are wondering what happened in City of Ghosts, you are in the right place!

Ratings
4.8 stars on Amazon
4.53 stars on Goodreads
Add City of Ghosts at Goodreads

What happened in City of Ghosts?

Cassidy Blake is looking forward to summer vacation.  She will spend time at the beach where the pull of other ghostly activity is weak. She will hang with Jacob, who happens to be a mind-reading ghost who only she can see.  When Cass was younger, she almost drowned but Jacob, somehow, had saved her.  They’ve been friends ever since.

Unfortunately, Cass’s parents, co-authors of books about the paranormal, have other plans for the summer.  They have landed a TV show about their passion: finding ghostly activity.  Rather than head to the beach, Cass finds herself traveling to Edinburgh, Scotland (aka the City of Ghosts) for the first shoot.  Jacob trails along.

When Cass feels the tug of a ghost, she has a need to find it and see how it died.  She can pull aside the veil between the living world and the “in between” and step through.  She fancies herself a photographer and uses a vintage black and white film camera when she travels to the in-between.  Sometimes Cass can see shadows of the ghosts when she develops the photos.  While in the veil, there is a bluish light that shines brightly in Cassidy’s chest.  Jacob refuses to tell Cass the rules about the veil.  She does know, however, that if Jacob sees himself in a mirror, something happens to him.  He sees himself as he is, dead, and can’t function normally.

Cassidy and her family stay in a flat called Lane’s End. Cass and her mom go for a sight-seeing walk and enter a famous graveyard where tours are given. They split up, and Cass is pulled through the veil against her will.  While there she witnesses an execution, but the strange thing is that, unlike the other ghosts who ignore Cass, there is a woman who watches her.  The woman wears a red cloak, and she begins to hum a song. Cass’s feet walk toward her without Cass’s permission.  Jacob rescues her and pulls her back into the land of the living. Later Cass learns that the woman is the Raven in Red and she is connected with many missing children’s cases.

As the story goes, the Raven in Red’s son went out into the snow and never came back.  She went out to search for him, putting on a red cloak so the boy could see her.  The Raven called and sang for him, but he never came.  Something broke inside her, and she began to sing for other children and take them.

At her flat, Cass meets Lara Jayne Chowdhury, a British girl about her age.  The girl wears a necklace with a mirror pendant.

When the film crew shows up the next days, Cassidy and her parents are introduced to Findley, their official guide.  They tour Mary King’s Close and Cassidy is again pulled through the veil.  The ghosts approach her, but she uses her camera flash to distract them and get back through.

When they are back in the land of the living, they see Lara. The girl disappears into the veil, so Cass and Jacob follow.  Lara uses her mirror to freeze a ghost and pull the dark thread of his soul from his chest.  When she does the man crumbles to ash.  Jacob is livid and warns Cass against being around this girl.  Lara is a ghost hunter and says that Cass is too.

Against Jacob’s advice, Cass meets up with Lara, and she explains that they are meant to help ghosts move on.  Lara doesn’t understand why Cass hasn’t sent Jacob on to the afterlife.  Jacob is connected to Cass somehow, which is why he can pass between the living world and the in-between.

Lara takes Cass on a ghost hunt and explains about using mirrors to show ghosts their true selves.  Cass teaches Lara about empathy and listening to what the ghost wants first.  Cass sends her first ghost to the beyond and realizes that, yes, this is what she is meant to do.

Lara warns Cass to stay away from the Raven in Red.  She tries to steal the thread of life from children.

Cass and Jacob visit Edinburgh castle where her parents are filming.  While there Jacob is pulled into the in-between by some of the Raven in Red’s children.  They trap him so that they may lure Cass to them.  The Raven plunges her hand into Cass’s chest and steals her light—her life.

Cass and also Jacob are now trapped in the in-between.  They cannot pass through the veil, but the Raven in Red does.  They find Lara, and she agrees to help them steal Cassidy’s life back.  She tells them the Raven in Red will dig up her own body and put Cassidy’s light in it.  After that, there will be no turning back.

How did City of Ghosts end?

They travel toward the graveyard where the Raven in Red was buried.  They have to fight off many of her stolen children on the way.  These children are shells, and they don’t have a former life within them, preventing Cass from sending them on. The Raven has even promised other ghosts on their path that she will set them free if they stop Cass.

Cass and Jacob fight them off, and Cass distracts them with her camera flash. They climb over the wall and into the graveyard. In the real world, the Raven in Red has enchanted two teenagers to dig up her grave.  Jacob creates a diversion, and Cass hides in the Raven’s coffin.  Cass pulls on the thread of light that is her life when the Raven tries to put it into her own body.  It rips in two. Cass has one half, and the Raven has the other.  Lara shows up, and she brought help.  In the world of the living, their guide Findley holds the Raven in Red, pinning her.

The Raven then steps back through the veil and into the in-between with Cass and Jacob.  She calls her children to her, and they attack.  The Raven goes for Cass, but Cass uses a shard of her broken camera lens to freeze the Raven.  Cass pulls at the thread of the woman’s life and finds that it is thick like a rope.  She has stolen the life of all these children and put them into herself.  Once free, the rope vanishes and so does the Raven and her children.  They are sent on.

The two halves of Cass’s life mend back together leaving a small crack where they were once two pieces.  When the life is returned to her chest, she wakes up in the land of the living in the locked graveyard.  Sirens sound in the distance.

Cass is in a heap of trouble from her parents and is charged with minor vandalism.  On her palm is a thin red line, not a cut, where the lens shard sliced her in the in-between.  She takes her camera to Bellamy’s Photo Store, and the worker gives her a new lens that has a minor defect, a small smudge on the glass.

Before Cassidy and her family leave for home, Findley warns Cassidy that there is a mark on her now.  She needs to be careful.  Lara also warns her that the longer Jacob stays tethered to the world of the living, the stronger he will become.  Lara gives Cass her mirror pendant necklace, and Cass flies away from Scotland with her parents.

Ready to read or reread City of Ghosts or Tunnel of Bones?  Click to buy and help us pay for hosting!