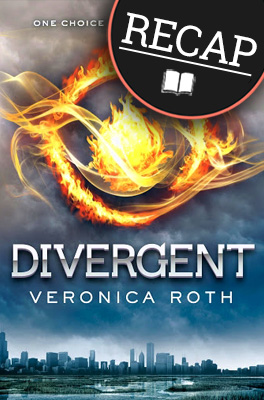 Read a full summary of Divergent, book #1 in Veronica Roth’s Divergent series. This page is full of spoilers, so beware. If you are wondering what happened in Divergent, then you are in the right place!

What happened in Divergent?

Beatrice, a 16-year-old later known as Tris, must first take the test that all must take before the choosing ceremony. Nobody is allowed to discuss this test as it is against the law, so there is no possible way to prepare for it. Tris finds herself in an empty room except for a seat with many wires attached and a woman named Tori, a Dauntless woman who volunteered to help with the test.

Tori attaches the many wires to Tris’ head and gives her a vile of clear liquid to drink. Tris enters a simulation in her head and faces many tasks to decide which faction will suit her best. After the challenges conclude, Tori shakes Tris roughly, telling her she is something known as “Divergent,” when one does not fit into just one faction but can fit into many. Tori tells Tris she must not tell anybody, not even her own parents. If anybody finds out, the end would be fatal.

The next day is the choosing ceremony. Tris knows Abnegation, the faction in which she grew up, isn’t the right fit for her. She has always admired Dauntless and the way they navigate life without fear. She believes her brother Caleb will choose Abnegation, as he is the ideal type, but he goes before her and chooses Erudite, which is a major turn of events. Tris then decides she doesn’t want to be Abnegation, even though it will break her parents’ hearts. She chooses Dauntless.

On the train ride to the Dauntless headquarters, Tris makes her first friend, Christina, who is a transfer from Candor. Later, to make it into Dauntless, they must jump off a building into a hole. Nobody wants to do it, so Tris volunteers to be the first jumper. In the hole, a net catches her, and her future boyfriend Four helps her off the net.

Later, after conflicts between Tris and a boy named Peter, the instructors tell them only half of the initiates will be able to stay Dauntless. If they didn’t make the cut, they will have to be “Factionless,” which is rumored to be worse than death. Tris works harder at all the skills being practiced and eventually makes it to the top of her class.

On visiting day, a day when the parents can say their last goodbyes to their children, Tris sees her mother, who admits to knowing that she is Divergent, as she is, too. Her mother also explains she was originally Dauntless and the reason she transferred to Abnegation was her colleague informed her it was wise to find a hiding spot. Then her mother leaves, and Tris is in a state of confusion.

After many challenges, Tris and Four fall in love, which is odd, as Four treated Tris poorly at the beginning of the book. Finally, in the end, Tris realizes the Erudite people have been developing serum that controls the initiates. Tris knows she must try to stop this, but it’s too late. She then finds out one of the Dauntless trainers, Eric, is secretly working with the Erudite.

All the Dauntless are injected with vials of the serum, including Tris and Four. Tris soon realizes the serum isn’t controlling her like it is the others, and she realizes it isn’t controlling Four either as he holds her hand on the train ride. They then find out the purpose of this control is for all the Dauntless members to kill all Abnegation, as Abnegation is said to be housing many Divergents.

Later, Tris is fighting and is forced to kill one of her closest friends, Will. She is very distraught. Amidst it all, Tris watches her mother fighting and then getting shot in the torso. She soon dies, leaving Tris in a state of despair.

How does Divergent end?

Later, they finally are able to give Four such a heavy dose that even his Divergence cannot overcome the serum. They put him in charge of all the security cameras back at the Dauntless compound. Tris heads back to Dauntless, bringing along her father, her brother Caleb, and Peter, who had betrayed them earlier. Tris shoots Peter in the hand out of irritation.

When they find Four, he seems unable to recognize Tris, but after a lot of fighting, he is no longer under the spell and realizes it’s her. They escape from a cargo train and flee to the Amity compound, where they hope to find shelter. Caleb, Peter, and Four are with Tris. Her father isn’t with them as he was shot while they were fleeing the Dauntless compound to save Tris.

There you go! That’s what happened in Divergent. I hope you enjoyed this recap of Divergent with spoilers.

Ready to read Insurgent?  Click to buy and help us pay for hosting!