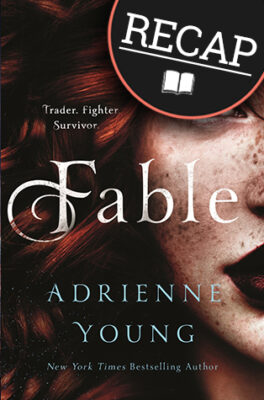 Read a full summary of Fable, book #1 in Adrienne Young’s Fable duology. This page is full of spoilers, so beware. If you are wondering what happened in Fable, then you are in the right place!

What happened in Fable?

Fable, a seventeen-year-old castaway, has spent the last four years surviving on the island of Jeval. She has learned to fend for herself by dredging for gems and selling them at port. She hopes to buy her way off the island.

Her father, Saint, left her after their ship, the Lark, sank in the Tempest Snare. He said, “You weren’t made for this world, Fable.” Saint also told her not to tell anyone that she was his daughter and that if she made her way off the island, she could visit him and take what is rightfully hers. Fable’s mother, Isolde, and most of the crew died in the wreckage. Fable, her father, and a man named Clove were the only ones to survive.

Fable has found a large vein of gemstone in the sea, and the other castaways become suspicious and plan to steal it.

A boy called Koy almost kills Fable, but luckily she makes it to a docked ship. The young helmsman, West, who often buys gems from Fable, reluctantly gives her passage aboard the Merigold.

West’s crew consists of Willa (who we later find out is West’s sister), Hamish, Paj, and Auster. At first, no one trusts her, but she pulls her weight onboard the ship, and they slowly begin to trust her more.

Fable tells the others that she will be searching for Saint on Ceros, but she doesn’t tell them that he is her father. They don’t believe he will take her on. Fable eventually discovers that the Merigold is a shadow ship that belongs to Saint. West is deep in debt to the man. The crew performs side jobs to try to raise money.

When they stop off in Dern, Fable slips up and hints that she has a gem sage’s abilities while trading in the market. It will draw attention, and they plan to leave quickly. Before they can, a competitor named Zola taunts them. Fable learns that Zola previously had Willa assaulted, giving her a long scar on her face. The crew gets their revenge by killing the man who did it.

They have to make a quick exit from Dern and are forced to face a terrible storm on the sea.

They survive and arrive in Ceros. Fable goes to Saint’s office and waits for him there. While there, she takes her mother’s sea dragon pendant. When Saint arrives, he refuses to allow Fable to crew for him. He says it was a mistake to let her mother on board his ship, and he won’t allow Fable to either. Fable learns that Clove is dead.

Saint “gives” Fable her inheritance: the fortune at the bottom of the ocean with the Lark. It turns out that the scar Saint carved onto her arm before abandoning her on Jeval is a map to the wreckage.

Fable also learns that Saint sent West to keep tabs on her and to trade with her.

Fable runs into Zola in a tavern, and he tries to talk her into joining his crew. She refuses, and he hints that West won’t be sailing much longer.

Willa finds Fable and puts her up for the night. She had been tailing Fable on West’s orders. The next morning Fable plans to ask West to let her crew with him, but she learns that Zola has ripped the Marigold‘s sails to shreds and left West for dead after beating him up.

No sailmaker will provide the Marigold with new sails. Zola has threatened every merchant. Fable finally tells the rest of the crew that she is Saint’s daughter and that she is a gem sage. She will share her inheritance with them if they vote to take her on. This way, they can buy new sails without dipping into their savings locked away on the coral islands. West reluctantly agrees to the deal but tells Fable that he can’t afford to care for anyone else.

Fable gets the money for new sails from her father by offering to return her mother’s sea dragon necklace. Fable also learns that her mother once dredged for Zola before joining her father.

A friend of Auster and Paj named Leo agrees to make new sails.

Zola hears about the sails and sends men to burn the Marigold. It barely makes it away from the shores of Ceros unscathed.

Fable guides West and his crew through Tempest Snare to the wreckage of the Lark. Fable and West dredge for the items of value hidden within its hull while also sneaking an underwater kiss.

They take their fortune to Dern to trade for coppers. They do this carefully to try to avoid notice. Willa confides in Fable that she plans to leave the Marigold and go home to Ceros.

West tells Fable that he named his ship Marigold after his and Willa’s sister, who died when she was four years old.

How did Fable end?

West confesses his love for Fable and says the only thing he’s truly afraid of is something happening to her.

The next morning Fable leaves the ship to get West’s mother’s ring back from a merchant before they head out. She spots her father, Saint, in a tavern. He tells her that she is going to get herself killed just like her mother did. He says that West is not who she thinks he is.

Before she can make it back to the Marigold, Zola arrives because he has figured out who Fable is. She is Isolde’s daughter. Zola captures Fable, takes her aboard his ship, and leaves Dern. Fable recognizes one of the crew members, Clove, the third survivor from the Lark, whom Saint allowed her to believe was dead.

There you go! That’s what happened in Fable. We hope you enjoyed this Fable summary with spoilers.

Ready to read or reread Fable or Namesake? Click to buy and help us pay for hosting! (affiliate link)