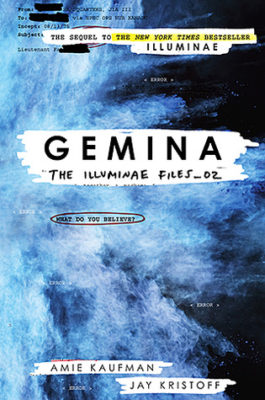 Read a full summary of Gemina, the second book in The Illuminae Files, now!  This page is full of spoilers so beware. If you are looking for a spoiler-free review, check our rapid review of Gemina.  If you are wondering what happened in Gemina, then you are in the right place!

What happened in Gemina?

The UTA is holding a trial and Director of BeiTech, Frobisher, is in the hot seat. BeiTech attacked both the mining operations in The Kerenza Sector as well as jump station Heimdall.  The files collected in Gemina go back to the beginning of the Heimdall attack as follows:

Niklas has been providing drugs for the Commander’s daughter, rich girl Hanna Donnelly, and he seems to have a crush on her though she has a boyfriend named Jackson (one of her father’s junior officers). Nick is a member of a group on Heimdall called the House of Knives. Nik harvests his drugs from a dangerous alien species that looks a bit like a snake with four heads.

Communications officer Sam Wheaton is secretly working for BeiTech and is blocking all calls about the Kerenza attack. He tells BeiTech Director Frobisher that the Alexander showed up and foiled their plans on Kerenza. Alexander was destroyed and a science vessel called the Hypatia will be arriving at Heimdall in five days and will report all that happened to bring BeiTech down. Frobisher wants Hypatia destroyed before they can leak the story and Sam is to help her get her people on Heimdall.

Commander Donnelly was aware of the illegal mining in Kerenza but still doesn’t know what really happened. The jump station is going under maintenance, and the wormhole will be down for seven days. Some communications will go down.

Sam blackmails Nik into getting a shipment onboard the station. What Nik didn’t know was that the shipment was a cargo container holding an elite BeiTech strike team who then begin taking over the entire jump station.

The team leader of the takeover squad is a ruthless man who goes by Cerberus.  Cerberus begins by securing the atrium where Commander Donnelly is holding a Terra Day celebration.  Nik, Hanna, and Jackson are all late for different reasons and so are not there for the takeover.  Cerberus kills the Commander almost immediately.

Jackson holes up in Central Command with the chief engineer, Grant, who happens to be Katy Grant’s father.  Katy was key in the last book for helping the Hypatia escape.  Hanna and Nik both hide out separately.  They are able to communicate some using their handheld devices.  Nik’s cousin, Ella, who is a tech prodigy is at her personal computers communicating with Nik and Hanna and trying to infiltrate the bad guys.

Hanna, using her father’s training, slowly starts picking off the hostiles and gains the notice of Cerberus.  He and his team begin hunting her.

Meanwhile, unknown to anyone, Nik’s four-headed snakes hatch, and though most of them stay close to the warm reactor, a few of them venture out to find human food.  They also pick off a few of the hostiles.

Cerberus and his people are trying to get the wormhole back online in time for a BeiTech assault fleet to come through and destroy the Hypatia.  Hanna finds out that they will also destroy everyone on the jump station when it is over.  No survivors to tell the tale.

Hanna finds out that Jackson is a deep cover hostile and works for Cerberus though he still seems to like her and wants to protect her.  It was he who blackmailed Nik into letting the hostiles on board. To the strike team, he is Sam.  Hanna also finds out that Nik served time in jail for killing two people including a child.  She finds out later that he didn’t do it but, took the prison time for his little brother to protect him.

Hanna rescues Chief Engineer Grant and using his instructions, Nik, Hanna, and Ella begin working together, still communicating through the handhelds, to keep the wormhole offline.  Nik and Hanna meet up in the reactor where hostiles hunt them.  Ella is attacked by a four-headed snake in her room.  Not long after that, Hanna is attacked by a snake as well.  Nik and Hanna are trapped in the reactor, but they set a trap using the snakes to kill some of the hostiles.  As they exit they meet Jackson, the traitor just before he is taken down by a snake.

They run away, but one of the female hostiles chases them and shoots Nik. Hanna kills her, but Nik dies. Hanna leaves and is able to contact the Hypatia. Someone else is also contacting Hypatia saying that Hanna is dead.  He says his name is Nik.

How does Gemina end?

Eventually, the scientists on Hypatia discover that the wormhole has its wires crossed with another dimension, one where Hanna dies, and Nik lives, and this is due to a particle called Gemina.  This is discovered by AIDAN, an artificial intelligence system preserved from the Alexander by Kady Grant.  Both Nik and Hanna are talking to the Hypatia (and AIDAN) in this dimension.  They have to get the dead Nik and the live Nik back across the wormhole at the same time, or the entire hole will collapse in on itself, as it tries to right the universes.  This is happening even as another drone fleet from BeiTech is incoming to destroy the jump station.

They make the “Nik exchange,” and Jackson (who was not killed by the snake) sacrifices himself to allow Hanna, Nik, and Ella to use a small vessel to go through the wormhole and join the Hypatia.  After they do, the jump station is destroyed with Jackson in it.  Before he died though, Jackson made everyone think that he had killed the three escapees.

Now Hanna and the rest of the Illuminae group are making themselves known at the BeiTech trial and are on a mission to bring down both BeiTech Corporation and its director, Frobisher.

Ready to order Obsidio?  Click to buy and help us pay for hosting!

There you go! That’s what happened in Gemina. Hope you enjoyed this recap of Gemina with spoilers.

5 thoughts on “What happened in Gemina (The Illuminae Files #2)”