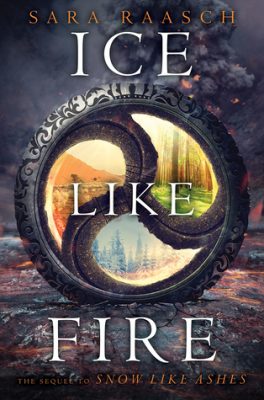 Read our full Ice Like Fire summary right here! This page is full of spoilers so if you haven’t read this book yet click here to read a spoiler-free Rapid Review of Ice Like Fire. If you need a reminder of what happened in Ice Like Fire, you are in the right place! Also see: What happened in Snow Like Ashes?

Ratings
4.1 stars on Amazon
3.82 stars on Goodreads
Add Ice Like Fire at Goodreads

I give it 3.5 stars overall.
Let’s be friends on Goodreads:

Main Characters and Other info

Meira is attempting to rebuild Winter even as Cordell continues to be a presence in their land. Theron remains in Winter as Meira’s boyfriend of sorts even though their engagement has been dissolved because Theron’s father, Noam, sees Winter’s debts as a sufficient link between the two nations. Mather is adjusting to his new demoted role, and he and Meira avoid each other most of the time. He spends his time training Winterian soldiers.

Meira knows something bad happened to Theron while he was in Angra’s captivity. Meira and Theron are not so sure that the recently deceased king of Spring is actually dead.

Both Cordell and Autumn need payment for helping the Winterians. Noam demands to open more of Winter’s mines because he wants to find the chasm of magic and Cordell’s presence is starting to grate.

Eventually, they do find the Chasm of Magic. When they approach the door Meira can tell something is wrong and there is a barrier that throws her and Theron back and causes Meira great pain and to see a vision of Angra and Theron during his time as a prisoner in Abril. Afterward, Meira insists that they should not open the chasm. Theron disagrees because he believes they need protection from Angra if he returns. He wants to spread magic evenly among all people.

Noam arrives and Theron has ideas on finding the keys for the door. He believes them to be in the three kingdoms symbolized on the chasm door. The message on the door says “Order of the Lustrate.” Meira previously read a book by The Order. She doesn’t tell anyone about the book.

Meira plans to make an alliance with the other kingdoms in order to keep Winter safe. To do this, she decides to give Cordell and Autumn less than the total amount they are expecting for their aide. Noam is livid and guesses what she is up to. He tells her to go ahead and try to find allies, but if she doesn’t return with a way to open the chasm, he will take Winter by force.

Mather finds a group of other Winterians who call themselves the Children of the Thaw. They are unsettled in Winter and don’t remember a time when they weren’t in slavery. Some say Mather is one of them now.

Theron tries to reassure Meira, but the distance between them is very great. He wants to form a treaty among all nations, but Meira thinks it will never work. It is clear that their goals are different.

Mather confronts Meira and in his drunkenness confesses that he likes her, but Meira sees that she cannot be who she needs to be when she is around him. Mather storms off. He does not join Meira and the others on their trip to the other kingdoms.

As they start their journey, Meira says goodbye to Shazi, the young Autumn princess who is still too young to use her magic. Autumn has signed Theron’s treaty.

Once Meira has left, an order is given that Winter is not to train a military anymore. Mather is angry at Sir for going along with these orders. He and his new friends decide to train an army in secret.

When Meira arrives in Summer, they meet a Summerian princess named Ceridwen. She teaches Meira more about Summer. Summerians bask in their own pleasures not giving a care for anything else. Simon, the king and Ceridwen’s brother is the worst of all. They keep branded slaves, and Meira learns that Simon is hoping to buy slaves from Winter. Ceridwen seems resistant to everything going on around her and Meira thinks that she and Ceridwen could be friends and that they might even help each other.

At a party on the night of their arrival, Meira tries to follow Ceridwen and is stopped by a few drunk Samarians. They scare her and her magic swells uncontrollably inside her. She causes it to snow which is very strange because she shouldn’t be able to use her magic like this in another Kingdom.

Ceridwen helps her find Summer’s key to the chasm in a wine cellar. On their way out of the cellar, a Ventrallan man is murdered, and Theron finds him. Meira wonders if Theron was following her. Ceridwen seems to know the dead person and blames King Simon when he shows up. Theron knows Meira has the key and came looking without him. Theron tells Simon about his treaty before he discussed it with Meira. Simon announces that he will travel with them when they leave.

When Meira touches the key, she sees visions of Theron’s time as Angra’s prisoner again. Theron is telling Angra that “he could have saved her.” Theron then takes the key from Meira.

Next, they travel Yakim where they meet Queen Giselle. They notice a great difference between the rich and poor here. Shortly after arriving Meira loses control of her magic again, and again Theron does not consult her on his plan for the peace treaty.

Meira and Ceridwen search for information on the Order of the Lustrate. They find the second key in the library with the help of Raris, the librarian. Again, Theron is there as if he was following Meria. According to the clues they find, they must travel to Ventralli next.

Meira has a vision when she accidentally touches the key. Her voice is saying, “These tests will make them ready.” She sees Hannah telling her father Duncan that she arranged to allow Angra to break the conduit and to kill them. Meira realizes that she is getting ready for something. But she doesn’t know yet what it is. If Meira dies, the conduit magic goes into all of the people of winter. But this isn’t a good choice because it has proven in the past that magic so widespread corrupts people.

Meanwhile, Allison, Mather’s mother sneaks The Thaw some weapons to train with. But when she delivers them she is killed by a Cordellan soldier. Cordell announces that it is taking over Winter and is declaring Winter and Cordellan colony. Sir tells Mather to do whatever is necessary to get to Meira and make sure she is ok. He and the rest of The Thaw sneak away.

Meira and her group continue on to Ventralli. It is much calmer than the other places. Theron’s mother was Ventralli. They wear half masks most of the time as part of their culture. Meira learns that Ceridwen and the Ventralli King, Jessie are in love. It is clear that Queen Raelyn knows of their love affair and seeks to harm Ceridwen. They find a tapestry-like the one that hid the key that sent them here to Ventralli, and it shows the same mountain scene in Paisley. Will they go to Paisley next?

King Jesse wants to ally with Winter so that he can overthrow his wife, Raelyn. She has been selling some of her people to Summer as well as making other unknown plans without her husband’s knowledge.

Ceridwen is missing, and Meira and her group go looking for her. As they go to her aid, Meira realizes that sacrifices will have to be made. She may have to give her magic back to the chasm. And hopefully, everyone else will too. Meira realizes that Hannah intended for her to die to save winter. She feels like she is going to her death.

Ceridwen is on a mission to kill her brother. She tells Meira that he is able to control people, even those not of his kingdom. Meira thinks that this might mean that Angra is still alive. Meira decides to help her. They are ready for battle.

When they attack Simeon’s caravan, Raelyn shows up and causes Ceridwen physical pain. Raelyn shouldn’t have magic since she does not have a conduit. Simon and Raelyn are working together, but Simon does not want Ceridwen to be Raelyn’s prisoner. Meira is trying to figure out if Angra is back or if the decay magic has simply moved on to others. Decay magic is definitely present.

Raelyn turns on Simon and kills him. Her soldiers quickly subdue the Summerian ones. Meira attempts to kill Raelyn with her chakram but misses. She is chased over rooftop by Reylyn’s soldiers until a group of Winter soldiers including Mather join the battle and save her.

Together they go to the Ventralli castle to confront the queen and find out what happened to Ceridwen. To their surprise, Noam is there, and he and Theron have an argument about Theron’s treaty. Raelyn says there will be new kingdoms run as they should be by her and Spring. Theron is so angry that his father won’t agree with him that he uses Meira’s weapon to kill Noam.

Theron orders the Winterians to be locked up. When they get to the dungeon Theron lets Meira and Mather escape and he chains himself to the wall. Angra’s decay is taking him over, and he is having a moment of clarity. He has done many things that he didn’t even know he did.

As they are leaving, Raris the librarian that they met in Yakim shows up. He is actually from Paisley and is part of the Order of the Lustrate. He seems to also have his own magic. Meira leaves with him to travel to Paisley and Mather is left to free the rest of the Winterians and Ceridwen.

There you go! That’s what happened in Ice Like Fire. Hope you enjoyed this Ice Like Fire Summary with spoilers.